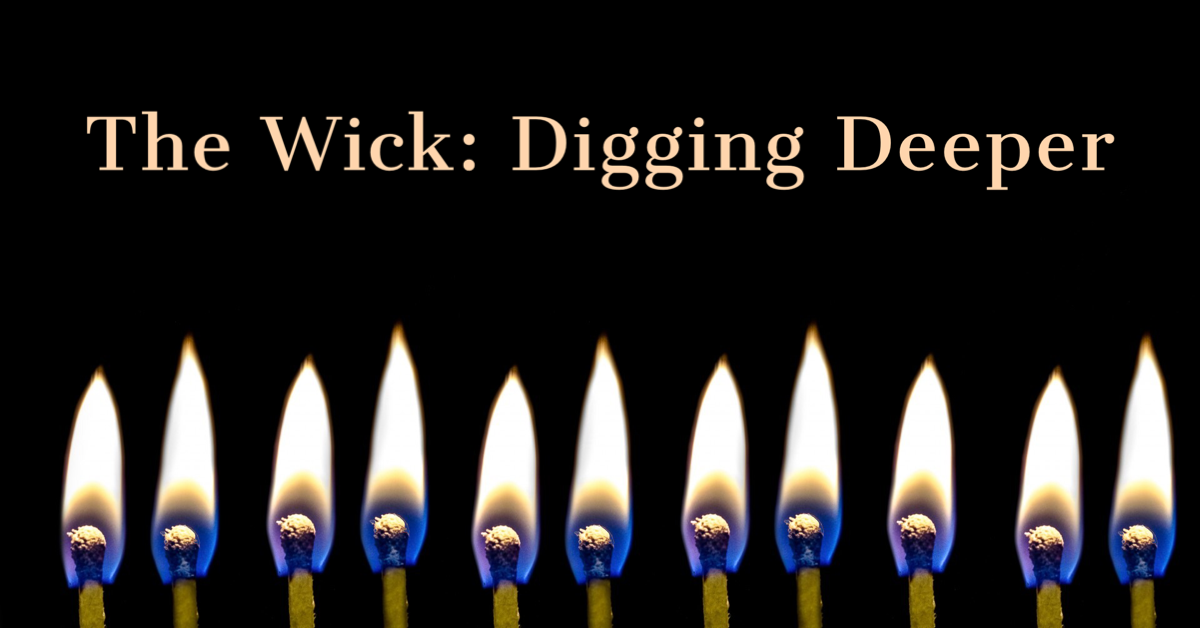 Yesterday’s Journey Study connects with today’s!
Check out The Wick!

1) What do we learn about the early believers from this passage?

2) What do we learn about prayer in this account?

3) Why was the place where they prayed shaken? (verse 31)

After they were released, they went to their own people and reported everything the chief priests and the elders had said to them. 24 When they heard this, they raised their voices together to God and said, “Master, you are the one who made the heaven, the earth, and the sea, and everything in them. 25 You said through the Holy Spirit, by the mouth of our father David your servant:

“Why do the Gentiles rage
and the peoples plot futile things?
26 The kings of the earth take their stand
and the rulers assemble together
against the Lord and against his Messiah.”

27 “For, in fact, in this city both Herod and Pontius Pilate, with the Gentiles and the people of Israel, assembled together against your holy servant Jesus, whom you anointed, 28 to do whatever your hand and your will had predestined to take place. 29 And now, Lord, consider their threats, and grant that your servants may speak your word with all boldness, 30 while you stretch out your hand for healing, and signs and wonders are performed through the name of your holy servant Jesus.” 31 When they had prayed, the place where they were assembled was shaken, and they were all filled with the Holy Spirit and began to speak the word of God boldly.

1) What do we learn about the early believers from this passage?
In a word? Unity. One purpose, one mind, one Body in their many parts, all working together for their singular mission. “After they were released, they went to their own people and reported everything” (verse 23). After being released from the council of the Sanhedrin where they had been detained and threatened for preaching Christ, Peter and John didn’t part ways and keep it quiet what had happened that afternoon, going home to nurse their wounds. They understood that living out the mission of the gospel, necessitated continual dependence on biblical community. They did not wait until the coming Sunday to connect with their local believers. No, they immediately went to “their own people”, telling them everything, which precipitated a powerful time of prayer and deep, life-giving connection. This local body of believers, this local church, carried one another’s burdens, set everything aside from the everyday tasks to come together in prayer, lifting their voices together. They spoke truth, they prayed boldly, they were answered and experienced God’s physical response together. Jesus’ core prayer for all believers is this, “make them one as we (Father, Son, and Spirit) are one. (John 17:21).

2) What do we learn about prayer in this account?
First, prayer here is natural and based on an open and trusting relationship with the Almighty. When Peter and John came and shared their report with their local church community, the very first response was prayer. They didn’t first discuss and deliberate on steps to protect themselves from future persecution, leaving prayer as an afterthought. Second, prayer was familiar. On hearing the report, they simply raised their voices and started praying. To be okay praying out loud in a group of other believers, you have to either 1) have no stage fright or 2) already have a close relationship with the Lord where prayer is commonplace. These believers were familiar with the Almighty, their prayer was conversational, they had made their home with Him; talking with Him about big and small and everything in between was simply their mode of operation. Third, prayer includes praying Scripture back to the Lord to keep their prayers focused and grounded in truth. (Verses 25-26 are quoting Psalm 2:1-2) Fourth, prayer acknowledges reality. The believers spoke frankly and honestly about their situation, the trials they were facing, and the religious unrest plaguing them. Fifth, their prayer relied on the bedrock of God’s faithfulness. The believers prayed for God to give them boldness and they expected He would give it to them. Finally, their prayer for God to heal and perform signs is not only secondary to the request for boldness, but also has one intent: for the lost to know the Savior. (John 4:48) Healing and miracles were not asked for to comfort those suffering, but for the glory of the Lord to be revealed and souls rescued for eternity.

3) Why was the place where they prayed shaken? (verse 31)
The Almighty God is Lord of all creation, nothing is beyond His sphere of control in any realm, physical or spiritual. It makes sense that the God of All would use creation to not only reveal Himself, but also to reflect His glory. Paul write in his letter to the Romans of God plainly revealing His “invisible attributes” through what “has been made” that is, creation. (Romans 1:20-21) In other places in Scripture, God uses the physical world to point our attention to the spiritual one, and His lordship over all. For the Old Testament prophet, Elijah, God met him in a still, small voice after sending an earthquake, a fire, and tornado. (1 Kings 19:9-13) In speaking with Job, the man faithful to God regardless of his tragic circumstances, the Lord spends several chapters pointing out the magnificence of creation from the micro to the macro level, all for the purpose of shifting Job’s heart towards God’s glory. (Job 38-41) This great encounter came to Job “out of the whirlwind” from whence the Lord spoke. (Job 38:1) Creation, and physical acts within creation, are intended for one main purpose, to point to God’s glory. Jesus said that if people were to stop praising God, the rocks themselves would cry out in praise! (Luke 19:40) The shaking of this place where the local body was meeting and praying was intended as a physical marker to encourage spiritual hearts as they were reminded of the God who hears and answers their prayer. They did not pray so that the place would be shaken, but God chose to bless them with a physical representation of His answer as well as a physical answer.

1) What do we learn about the early believers from this passage?
In our western culture of individualism, this aspect of unity among believers is easily missed or down played. We find a way to manage on our own and only reach out “if we really need it”. Sisters, this is not the Lord’s design or His good, Father heart for us! Surrounding yourself with a solid local body of believers and engaging in a small, tight-knit group of Christ-followers to walk beside you, speak truth over you, and pray alongside you is exactly what Jesus prays for us! Have you made yourself available to others, being vulnerable with them and inviting them to do the same? Are you sharing with other sisters and brothers in a manner that looks like “doing life together” instead of simply showing up on a Sunday to sit in your regular spot? Boldly reach out to surround yourself with biblical community, decide to invest deeply in it when you have it, and take steps to lead others in vulnerability and speaking truth in this context. This richness is truly life-giving!

2) What do we learn about prayer in this account?
Whether you’ve been practicing the spiritual disciple of prayer for decades, you’ve never prayed, you consider prayer to be a bit mystical and “genie-in-a-bottle-esque”, or something else entirely, the God who crafted you has designed prayer for the purpose of knowing Him and growing in your relationship with Him. While it can feel mysterious, the more you practice speaking with the Savior, the more familiar His voice becomes. Consider the 6 steps from above and consider which areas you might have misconceptions about prayer or have room to grow in.  What about prayer is comforting or maybe uncomfortable? What questions do you have about prayer? Consider keeping a prayer chart and noting what you pray most often for or how you pray and compare it to the prayer recorded in this passage. What do you think it means to pray for God’s glory to be made known? Write down your thoughts and share with your own biblical community or send us an email here!

3) Why was the place where they prayed shaken? (verse 31)
We like to be eye-witnesses, we like to experience things firsthand for ourselves, and we are easily caught up in the physical realm of these experiences as we touch, see, hear, taste, and smell. Sometimes, because of this easy connection to the physical realm, it becomes a challenge to remember that everything in creation is intended to point to the Creator. Ultimately, we are not called to pray for our glory, our comfort, or our will, but for the glory of the Lord to be revealed in increasing fashion. While we don’t always experience a physical representation of the Lord’s answer that we can experience with our senses, it does not mean His answer is any less real. When we do see a connection between the physical and the spiritual, be encouraged in the Lord’s reminder that He is indeed God of All and will bring hearts close to Him as He reveals more of His glory in our situations!

What do YOU think?! Share Here!
Missing the connection to our other Journey Study?
Catch up with The Wick!

This is Ignite Week One!
Don’t miss out on the discussion!
Sign up to receive every GT Journey Study!