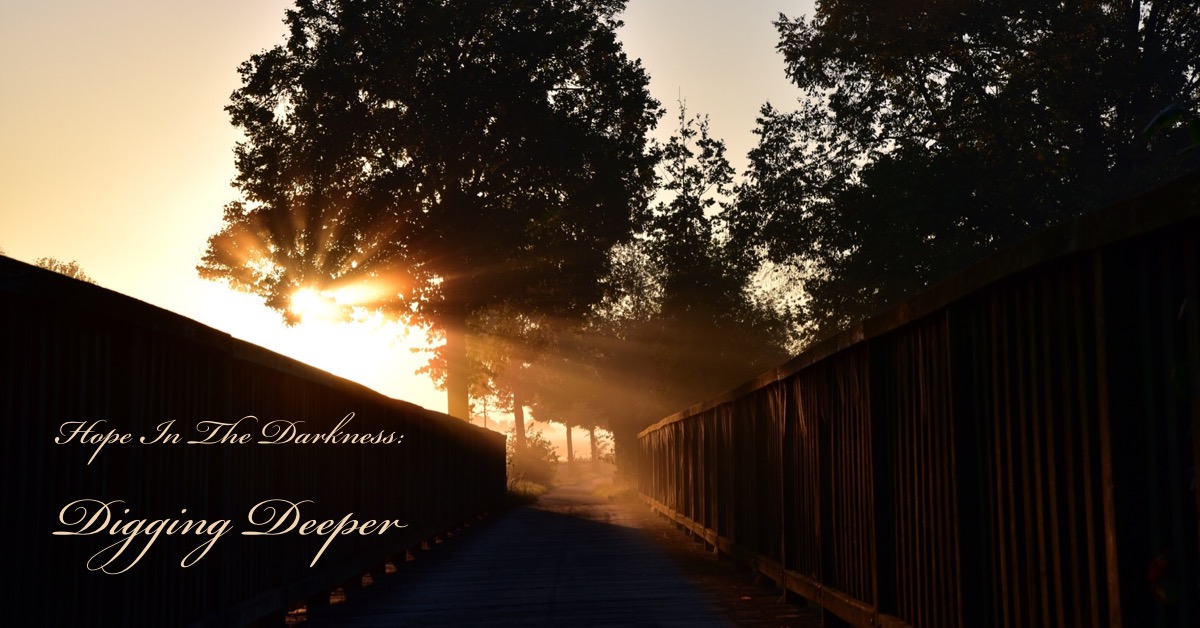 Yesterday’s Journey Study connects with today’s!
Check out Hope In The Darkness!

1) Who is the serpent and what is his tactic?

2) What does Eve’s response reveal about humanity?

Now the serpent was the most cunning of all the wild animals that the Lord God had made. He said to the woman, “Did God really say, ‘You can’t eat from any tree in the garden’?”

2 The woman said to the serpent, “We may eat the fruit from the trees in the garden. 3 But about the fruit of the tree in the middle of the garden, God said, ‘You must not eat it or touch it, or you will die.’”

4 “No! You will not die,” the serpent said to the woman. 5 “In fact, God knows that when you eat it your eyes will be opened and you will be like God, knowing good and evil.” 6 The woman saw that the tree was good for food and delightful to look at, and that it was desirable for obtaining wisdom. So she took some of its fruit and ate it; she also gave some to her husband, who was with her, and he ate it.

1) Who is the serpent and what is his tactic?
In reading the Bible, it’s crucial to correctly understanding it by remembering that the whole of it is one magnificent story. In verse 1, a cross-reference (the tiny hyper script letters) links the serpent reference to Revelation, the very last book of the Bible! Revelation is the apostle John’s record of his visions from God and His angels. In Revelation 12, John is recounting a war in Heaven (verse 7) between the angels. The angels are divided between Michael (and his angels) and the Dragon (and his angels). Michael’s angels win and the Dragon is cast out from Heaven forever. The serpent is here described as being “ancient” and “called the devil and Satan, the deceiver of the whole world.” Going all the way back to Garden, we now have a fuller picture of who this “serpent” is as Satan himself! Satan’s tactic was to ask a penetrating question of Eve, making her question what she thought she knew of God. “Did God really say…” (verse 1) Eve replied and then Satan prodded her farther, completely contradicting what God had told Eve, “No! You will not die…” (verse 4). Going in for the final move to win Eve over, Satan goes beyond contradicting God, to make himself appear superior by having greater insight, “In fact, God knows that when you eat it…” (verse 5).

2) What does Eve’s response reveal?
This was God’s original command to Adam and Eve regarding the Tree of Knowledge of Good and Evil, “you shall not eat, for in the day that you eat of it you shall surely die.” (Genesis 2:17) Here is Eve’s response when Satan questioned her as to what God had said, “God said, ‘You must not eat it or touch it, or you will die.’” (Genesis 3:3) See the addition Eve made? “Or touch it”. Her words reveal that in her prideful humanity, Eve was willing to believe that God was more stringent and stingy than His character displayed. He had given a vast kingdom of beauty to Adam and Eve and showered them with delightful attention, generously providing them all of creation with only reasonable, loving boundaries. Yet in a moment of pressure, Eve willingly allowed her fear and pride to win over truth and God’s proven character.

3) God said they would die, the serpent said they wouldn’t, but no one died after eating the fruit. Who lied?
In Genesis 2:17 God says, “you shall not eat, for in the day that you eat of it you shall surely die.” In Genesis 3:4 Satan insists, “No! You will not die…” To help us understand this confusion, we first need to remember the truth of Scripture’s teaching that Satan is the Father of Lies (John 8:44) and no truth is in him. That is our first anchor. Secondly, we look to the context of the Garden originally. It was designed for life, flawless, perfect, eternal life existing in the context of a beautiful and intimate relationship with God. In the midst of Eden was the Tree of Life, of which there was no prohibition to eat from until after Sin.(3:22) The Garden’s design was for eternal enjoyment of life, but for it to continue, sin could have no place. Innocence of evil must be maintained in order to enjoy the pure delights of righteousness, so a boundary was placed and a command given to not eat from the Tree of Knowledge of Good and Evil. In that moment, Death would occur, because eternal righteous life would no longer be possible. The life they had known would forever be gone. With even one drop of sin, perfect righteousness could no longer exist. Death would enter, their physical bodies would no longer be immortal, and the spiritual death would be the most severe as it would sever the sweet intimacy of union between God and humanity. Yes, Death would reign. Adam and Eve died that day, along with the rest of humanity to come after them.

1) Who is the serpent and what is his tactic?
The serpent in the Garden, the Dragon in Revelation, the devil, and Satan the Deceiver, are all names for the archenemy of every believer. Revelation 12 also describes him as the “accuser” who accuses believers “night and day before God.” (verse 10) Peter says the devil is our adversary who “prowls around like a roaring lion, seeking someone to devour.” (1 Peter 5:8) Don’t be deceived, this enemy is very much real and alive and seeking to steal, kill, and destroy us. (John 10:10) The more we know about Satan, the better we can be prepared for his attacks and the quicker we can recognize his schemes in our everyday lives. Knowing that he is an accuser, helps us notice the lies of accusation. Phrases like “not enough”, “God doesn’t want you”, “you’re unlovable”, and countless others point to the deception of an accuser, not the truths of the God who died to save you. The more familiar you are with truth, the easier it will be to discern the enemy’s lies when he attacks. Be on guard, just as he did with Eve, Satan’s goal is to get you to question the goodness and reliability of God and His Word. Cling to truth!

2) What does Eve’s response reveal?
How deeply do you cling to truth? I mean, not your own version of truth when you’re arguing with your spouse or coworker, but the actual truth. It’s one thing to mentally attest to a truth statement like “God is good”, but quite another when circumstances appear to cast doubt on that belief. When you lose a beloved one, when the marriage dissolves, when the gossiping lies spread, when the bank account runs low, the deceiver’s voice comes in low and haunting, “Did God really say….”? Every time, we have a choice in our response, be anchored in truth or grab for an easy lie. A.W. Tozer said, “What come into our minds when we think about God is the most important thing about us.” If Eve had chosen to stay anchored in truth, rather than doubt what she knew of the Lord, she would have been kept from sin and its damning affect. The amount of Scriptural truth we take in and cling to will keep us from sin too!

3) God said they would die, the serpent said they wouldn’t, but no one died after eating the fruit. Who lied?
As noted earlier, the Bible is the compilation of one grand story, woven beginning to end with one incredible theme: the redemption of mankind. It all began here, in the Garden of Eden where the heart of God created a space for mankind to enjoy Him for all eternity and for Him to endlessly delight over them. As goodness and kindness demand, God would not force their love, He was present to be enjoyed of their own choice, and so He gave the gift of choice by planting the Tree of Knowledge of Good and Evil. If His creation hungered to experience beyond what He, the Giver of Life, had given, they could choose to know the existence of Sin and the pain it would bring. And they chose it. What a tragedy it would have been for God to leave His treasures in that state of sin and separation from Him! But by His incredible grace, God said, “Since the man has become like one of us, knowing good and evil, he must not reach out, take from the tree of life, eat, and live forever.” (Genesis 3:22) The Lord could not bear the thought of His beloved ones living forever in sin. So He banished them, not because He hated them, but that they might be preserved and have the opportunity to choose Him again. See, Hope was coming. Jesus would one day be their Rescuer and bring them back home. Extravagant Love!

What do YOU think?! Share Here!
Missing the connection to our other Journey Study?
Catch up with Hope In The Darkness!

This is Glimmers Week One!
Don’t miss out on the discussion!
Sign up to receive every GT Journey Study!