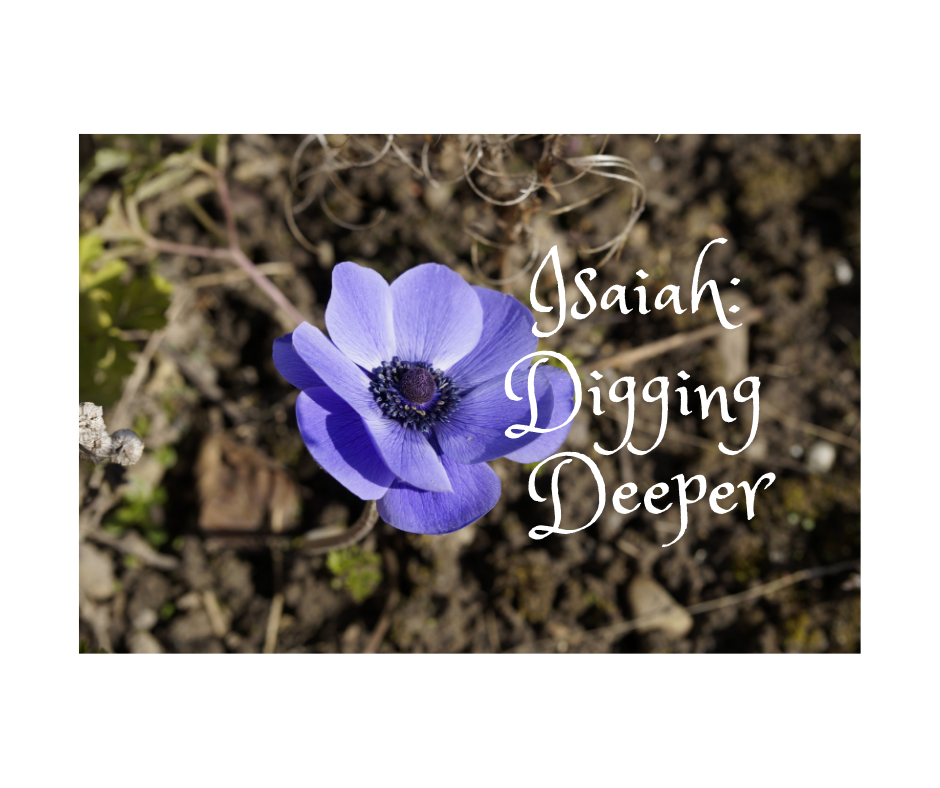 2) Why does God tell Isaiah to “deafen their ears and blind their eyes”? (verse 10)

3 And one called to another:
Holy, holy, holy is the Lord of Armies;
his glory fills the whole earth.
4 The foundations of the doorways shook at
the sound of their voices, and the
temple was filled with smoke.
5 Then I said:
Woe is me for I am ruined
because I am a man of unclean lips
and live among a people of unclean lips,
and because my eyes have seen the King,
the Lord of Armies.

6 Then one of the seraphim flew to me,
and in his hand was a glowing coal that
he had taken from the altar with tongs.
7 He touched my mouth with it and said:
Now that this has touched your lips,
your iniquity is removed
and your sin is atoned for.
8 Then I heard the voice of the Lord asking:
Who should I send?
Who will go for us?
I said:
Here I am. Send me.

11 Then I said, “Until when, Lord?”
And he replied:
Until cities lie in ruins without inhabitants,
houses are without people,
the land is ruined and desolate,
12 and the Lord drives the people far away,
leaving great emptiness in the land.
13 Though a tenth will remain in the land,
it will be burned again.
Like the terebinth or the oak
that leaves a stump when felled,
the holy seed is the stump.

1) Why did Isaiah say he was “ruined”? (verse 5)
Isaiah was the same man, who had done the same things both before His encounter with the glory of the Lord as he was in the moment of the vision. Yet, seeing the Lord’s glory, just the hem of His robe filling the temple, was like looking into a mirror where Isaiah saw the inky, sickening blackness of his own soul. In the presence of pure holiness, Isaiah’s sinful humanity became palpable to him and he cried out, very truly, “I am ruined!” As the psalmist rightly says, “If you, O Lord, should mark iniquities, O Lord, who could stand?” (Psalm 130:3) Even one sin separates us eternally as we are less than perfectly holy, let alone sins as countless as the sand on the seashore. Isaiah knew he was not blameless, and he knew he didn’t need to go farther than his lips to point to see his sinfulness. A harsh word, a little lie, speech that tears down, not to mention gossip, or deception, or mockery, or hatred.

2) Why does God tell Isaiah to “deafen their ears and blind their eyes”? (verse 10)
To understand this verse, we need to understand the context, not just this chapter, but the history of the Jewish nation as a whole. To sum up, the Lord pursues and pursues them over generations and generations. They turn back to Him for in short spurts, but the majority of the time, they rebel and turn against the Lord with ever increasing intensity. They reject Him in small amounts at first, like when they told the prophet Samuel they didn’t want to be a theocracy (ruled by God) anymore, but they’d rather have a human king “like all the other nations” instead. (1 Samuel 8:19-20) They more they turned away from God, the greater their degree of total rejection of Him became. The prophet Hosea (a contemporary of Isaiah) was the last prophet to prophesy to the Northern Kingdom before they fell under Assyrian rule, and he described God’s people as “whores” who had forsaken Him to play the adulteress to pagan gods. (Hosea 1:5-6) In verse 9, the Lord instructs Isaiah to keep prophesying, even though they are a people who clearly do not understand the hope God is offering them. Isaiah is to prophesy, despite the fact that they are “looking” at Isaiah and his demonstrative life, but they are not perceiving what God is communicating. The natural result of hearts that persistently turn away from truth is spiritual deafness and blindness. A spiritual “numbing” happens the more one rejects truth again and again and again. God was not blinding eyes that wanted to see Him, He was grieved over their own choice to perpetually choose not to see what He wanted them so desperately to see, that He held their hope!

3) What is meant by “the holy seed is the stump”? (verse 13)
You’ve probably seen an old tree stump cut down, yet a new green shoot poking out despite the dead exterior. This is the imagery God is giving to Isaiah in this prophecy. God spent several verses painting an exceedingly bleak picture of the Jewish nation. Though Isaiah would preach hope, they would spurn it. Though Isaiah was being sent with an invitation to repent, the Jews would reject it. As a result, God’s righteous consequence would come upon them and they would be decimated and removed. Even So, God would leave a tenth (not necessarily meant to be a specific number, but rather to indicate a very small percentage of the whole) of the Jewish nation, but even those would reject Him as well. Even so again, “Like the terebinth or the oak that leaves a stump when felled, the holy seed is the stump.” (verse 13) The Holy Seed is the Lord Jesus Christ who would one day come, born a Jew to save the Jews as their Promised Messiah. Jesus is the Promised Hope, even in the midst of rejection.

1) Why did Isaiah say he was “ruined”? (verse 5)
No one can see God’s face and live (Exodus 33:20), yet Isaiah was given a glimpse of the Lord’s glory and his immediate response was woe for sinfulness. Where have you encountered the glory of the Lord? Not just a good praise song set at church, but time where you have felt so impressed around you by the awe-filling glory and majesty of the King of Kings. When have you literally fallen down prostrate before the Lord, confessing your sin because you glimpsed His holiness? Isaiah didn’t live his life inside of a vision at the temple, and we can’t live in these moments of supreme glory either, but the Lord will give them to us if we seek Him. Study the Exodus passage describing Moses and his request to “please show me Your glory!” (Exodus 33:18) and ask the Lord for the same thing. Seek His word, look for His face, pray with a hunger to know Him and see Him, and He will respond!

2) Why does God tell Isaiah to “deafen their ears and blind their eyes”? (verse 10)
How many times have you heard the hope of the gospel and the forgiveness offered through Jesus Christ because of His sacrifice, and still you haven’t surrendered to Him? How many times have you been convicted of a favorite sin, and chosen to keep doing it because you have every rationale in the world memorized to keep on doing it? How many times have you known exactly how you could be serving your local church, or loving that stranger, or making that change in your marriage, yet you ignore it again and again? Be on your guard! Ask God to make your heart soft to His leadings. Ask Him to open your eyes to see His truth. The more your read His Word and engage Him through prayer, the more your ears will be tuned to hearing His voice, your eyes will be looking for Him, and your heart will be ready to be shaped by His Spirit. He longs for you; He is pursuing you! Turn and let His embrace catch you!

3) What is meant by “the holy seed is the stump”? (verse 13)
The Lord is a God of Hope in the midst of darkness. Isaiah was called to prophesy about such great coming darkness where Jews would increasingly reject Christ, but even then, God promised Hope would still come. Maybe you’ve turned a cold shoulder to God, decided you wanted to run life your own way, and in light of your past and your heart attitude, you’re pretty certain there’s not a chance God would “take you back.” If He only knew what you have done, right? Or maybe you know someone who fits those shoes. A parent, or sibling, a child, or spouse. Either way, the story of Isaiah, the rebellious Jewish nation, and God’s promise of assured hope is for YOU. As long as you are breathing, peace with God is possible because of Christ. His forgiveness is complete. His hope for life is eternal. It’s not too late to find peace and redemption through a relationship with Jesus!

What do YOU think?! Share Here!
Missing the connection to our other Journey Study?
Catch up with Isaiah!

This is Cross Week One!
Don’t miss out on the discussion!
Sign up to receive every GT Journey Study!