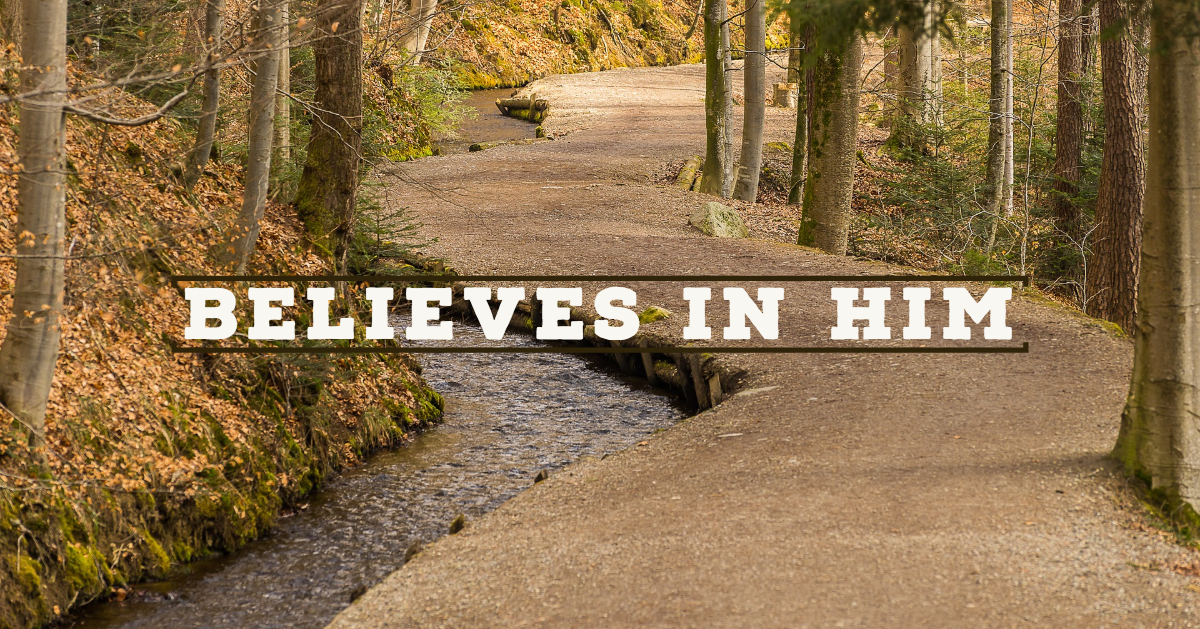 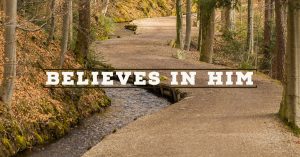 The beauty of John 3:16 is the simplicity of the gospel as it captures a fly-over view of God’s master plan. Many of us who grew up in the church memorized it as a small child.  Perhaps some of us have quoted this in a brief conversation with a stranger. It’s likely most of us have clung to its foundational promises in our own struggles.

Believes in Him
As we’ve been unpacking this verse phrase by phrase, we’ve already seen the first two action-words: loved and gave. These both speak of God’s initiation toward mankind. Now, however, we come to the third verb found in the phrase, “believes in Him”.

While this phrase is simply stated, we still must ask ourselves, “what does it mean to believe?” and, “what exactly must one believe in”?

On the one hand, the immediate context of verse 16 helps us understand we are simply to believe in Him, in God’s only Son, that is Jesus.  Yet, that word believe…we need a little more information on it, don’t we? The Greek word here for believe, pisteuó, also specifically means “to entrust”.

This sheds a bit more light on what this kind of believing looks like. Jesus actually gives us an example when we’re told He chose not to entrust Himself to men because He knew what was in their hearts. (John 2:24-25) Instead, He entrusted himself to the One true Judge. (I Peter 2:23) The essence captured in these passages signifies that “to entrust” oneself to another indicates embracing that person’s authority; you trust their heart and you hand your life over to their care.

This believing in Him is more than simply agreeing to facts such as Jesus is God. After all, James warned the church how even the demons do that and shudder in fear! (James 2:19) To believe in Him, is to entrust oneself to God the Son, Jesus, whom God gave as a sacrifice to the world for its sin. (1 John 2:2)

But still, who is this Son we are to believe in?
We can agree that if we entrust ourselves to a false version of the Son then it is not true Biblical belief.  We need to be certain who this Son is.

The Son of Man
It’s important to understand how verse 16 is right in the middle of a long conversation between Jesus and Nicodemus.  As they’re talking, Jesus refers to Himself as the Son of Man (3:13), as He often did throughout His earthly ministry.  This name speaks both to Jesus’ humanity, (‘son of man’ was a common title used in that day), and for the ear tuned to the kingdom of God, it was also a subtle, but very clear revelation of Jesus’ deity.  It alludes to Daniel 7:13-14 where the Son of Man is described as an exalted being whose kingdom will have no end.  In addition, Jesus says of Himself in Matthew 24:30, ”…they will see the Son of Man coming on the clouds with power and great glory.”

Jesus then makes another Old Testament allusion.
In Numbers 21 the Israelites complained to Moses about their circumstances and God punished them with poisonous snake bites.  This consequence softened their hearts and they admitted their sin, turned to God, and asked for the snakes to be removed. God tells Moses to make a bronze image of a snake and to lift it up high.  When the people who’d been bitten looked at the snake, God healed their wounds.  With this story in mind, Jesus says to Nicodemus, “Just as Moses lifted up the snake in the wilderness, so the Son of Man must be lifted up, so that everyone who believes in him may have eternal life.” (3:14-15) Jesus speaks of Himself and His coming sacrifice.  The Son of Man would be lifted high on a cross for the healing from sin of all who believe in Him. When those who know they are sin-sick look to Him, entrusting themselves to His atoning work and not the works of themselves or other men (Ephesians 2:8-9), Christ’s wounds will heal their hearts (Isaiah 53:5, I Peter 2:24)

This mystery of Jesus being fully-human and yet fully-God is why His sacrifice could be acceptable and pleasing to God the Father. Hebrews 2:17 says it this way, “Therefore, he had to be like his brothers and sisters in every way, so that he could become a merciful and faithful high priest in matters pertaining to God, to make atonement for the sins of the people.”

The Son God gave to the world.
The Son we are to believe in.
He is not just another teacher, prophet or good man.
He is not even just another type of god, as if there could be more than one.
No, Jesus is God Himself, who dwelled among His people, for His people.

This is what sets Christianity apart from any other religion.
This is why we are to believe in, entrust ourselves to, surrender our weight to JESUS!
God’s perfect plan is displayed in the combination of sinless flesh and holy reign, providing redemption, forgiveness of sins and a way back into fellowship with the God of this universe. Believe in Him!

Thanks for joining us today as we journeyed into Gospel Week Three! Don’t miss out on the discussion below – we’d love to hear your thoughts!

Looking for other journeys from this theme?
Here’s a link to all past studies in Gospel!