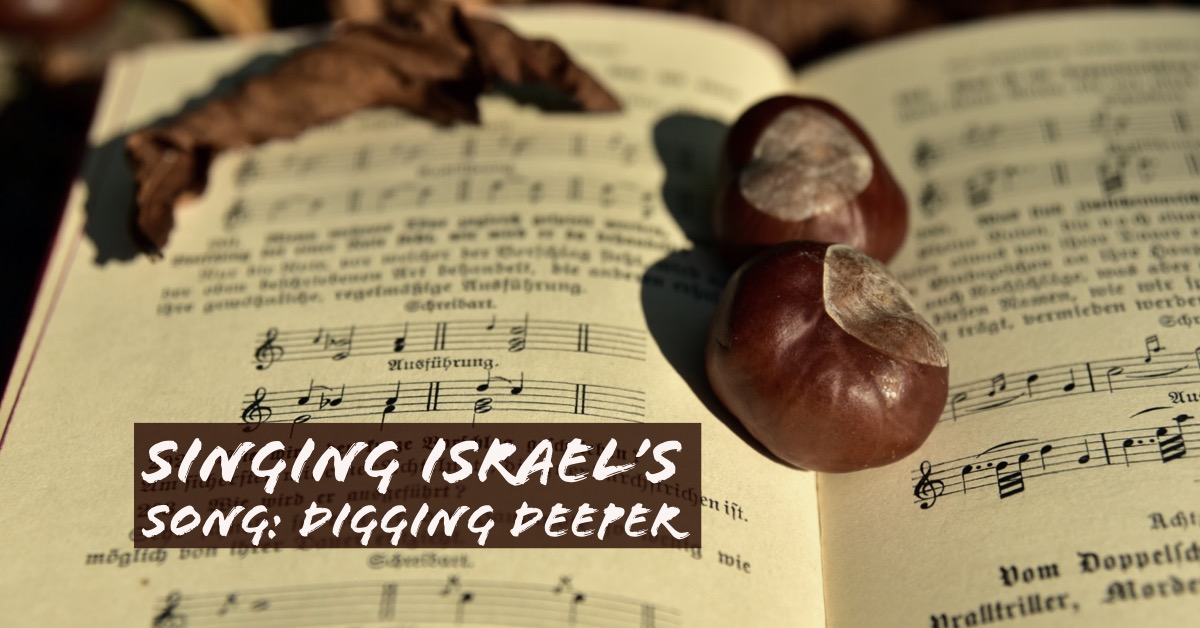 Today is 2-for-1 Friday!
Check out Singing Israel’s Song!

2) How does this song inform future praises of God’s people?

3) The Israelites are responding to God’s miraculous protection and provision. Where else in Scripture do we see people respond to God in worship?

Then Moses and the Israelites sang this song to the Lord. They said:
I will sing to the Lord,
for he is highly exalted;
he has thrown the horse
and its rider into the sea.
2 The Lord is my strength and my song;
he has become my salvation.
This is my God, and I will praise him,
my father’s God, and I will exalt him.
3 The Lord is a warrior;
the Lord is his name.
4 He threw Pharaoh’s chariots
and his army into the sea;
the elite of his officers
were drowned in the Red Sea.
5 The floods covered them;
they sank to the depths like a stone.
6 Lord, your right hand is glorious in power.
Lord, your right hand shattered the enemy.
7 You overthrew your adversaries
by your great majesty.
You unleashed your burning wrath;
it consumed them like stubble.
8 The water heaped up at the blast from your nostrils;
the currents stood firm like a dam.
The watery depths congealed in the heart of the sea.
9 The enemy said:
“I will pursue, I will overtake,
I will divide the spoil.
My desire will be gratified at their expense.
I will draw my sword;
my hand will destroy them.”
10 But you blew with your breath,
and the sea covered them.
They sank like lead
in the mighty waters.
11 Lord, who is like you among the gods? Who is like you, glorious in holiness,
revered with praises, performing wonders?
12 You stretched out your right hand,
and the earth swallowed them.
13 With your faithful love, you will lead the people
you have redeemed;
you will guide them to your holy dwelling
with your strength.
14 When the peoples hear, they will shudder;
anguish will seize the inhabitants of Philistia.
15 Then the chiefs of Edom will be terrified;
trembling will seize the leaders of Moab;
all the inhabitants of Canaan will panic;
16 terror and dread will fall on them.
They will be as still as a stone
because of your powerful arm
until your people pass by, Lord,
until the people whom you purchased pass by.
17 You will bring them in and plant them
on the mountain of your possession;
Lord, you have prepared the place
for your dwelling;
Lord, your hands have established the sanctuary.
18 The Lord will reign forever and ever!

1) In verse 2, the people sing, “This is my God, and I will praise Him, this is my father’s God, and I will exalt him.” Why is it significant that they proclaim God is their God and their father’s God?
When we think of the term “father”, we typically think of the man we call “dad”. In the Old Testament, the designation “father” often had a wider meaning. Father was used in reference to the historical fathers of the people of God, also known as the patriarchs. In Exodus 3:6, God speaks to Moses from the burning bush and says, “I am the God of your father, the God of Abraham, the God of Isaac, and the God of Jacob.” In Exodus 2:23-25, God heard His people’s cry for slavery, He remembered His covenant with Abraham, and He saw and knew the people of Israel. God was faithful to their ancestors and He continued to be faithful to them as He brought them out of Egypt. When the Israelites sing that they are praising their God and their father’s God, they are pointing out that the God of Abraham, Isaac, and Jacob is the same God that rescued them!

2) How does this song inform future praises of God’s people?
The book of Psalms is often thought of as the song book or hymn book of the people of God. It includes 150 psalms collected over many years by many authors, including Moses. The psalms began to be written in the time of Moses and continued to be penned throughout Israel’s history nearing to the time of Jesus. This song in Exodus 15 might have inspired Moses to write more songs, which were ultimately included in the book of Psalms.
The psalms frequently refer to the Lord’s instruction and the law of the Lord. This refers to the Torah: Genesis, Exodus, Leviticus, Numbers, and Deuteronomy. It is reasonable to assume that the psalm writers read and were inspired by Israel’s song. Many words and phrases found in this song are reflected throughout various other psalms. Verse 2 is directly quoted in Psalm 118:14 and Psalm 114 recalls this story of the Exodus.

3) The Israelites are responding to God’s miraculous protection and provision. Where else in Scripture do we see people respond to God in worship?
As discussed in question 2, the psalmists penned many songs of praised to God. Similarly to the Israelites, David was being pursued by his enemies and by Saul, but the Lord rescued him. In response to God’s protection, he wrote Psalm 18 (also seen in 2 Samuel 22): “The LORD is my rock and my fortress and my deliverer, my God, my rock in whom I take refuge, my shield, and the horn of my salvation, my stronghold.” (verse 1)
Throughout the Gospels, we see people respond to Jesus in worship. In Luke 1, we see two songs of praise in response to an encounter with God: one from Mary after being told she would bear the Son of God and one from Zechariah when his speech was restored after the birth of his son, John the Baptist.
In Luke 17:11-19, Jesus heals ten lepers. Luke tells us that “one of them, when he saw that he was healed, turned back, praising God with a loud voice; and he fell on his face at Jesus’ feet, giving him thanks.”
An encounter with God should always result in worship!

1) In verse 2, the people sing, “This is my God, and I will praise Him, this is my father’s God, and I will exalt him.” Why is it significant that they proclaim God is their God and their father’s God?
Just as God was faithful to the patriarchs and the Israelites, we can be sure that He will be faithful in our lives as well. We can learn from the way the Israelites looked back and remembered how God had provided for them in the past as well as their present circumstances. Take some time to reflect on and praise God for how He has been faithful to you in the past. Then thank Him for the ways He is providing for you now, even if you can’t see it yet. Worship Him with a heart of trust!

2) How does this song inform future praises of God’s people?
Because God’s character is unchanging, the songs in the Bible are still relevant and true for us today. Since we read this passage and the psalms, it’s easy to forget that these are songs that were sung. Look for references to Scripture during your Sunday morning worship service or on your favorite worship playlist. The next time you’re reading Scripture, try turning it into a song of praise to God or create your own based on God’s unchanging character!

3) The Israelites are responding to God’s miraculous protection and provision. Where else in scripture do we see people respond to God in worship?
We see in Scripture that miraculous encounters with God are followed by worship of Him. We may not speak to God through a burning bush like Moses or be raised from the dead like Lazarus, but if we are in Christ, perhaps we have experienced the greatest miracle of all. Through His death on the cross, Jesus gives us new life in Him. Our dead hearts are made new and we have received an incorruptible inheritance for eternity. For this miracle, Jesus deserves all our praise. Have you worshipped God for your salvation lately? Praise Him for the miracle He has done in your heart and life and the declare Him to others!

What do YOU think?! Share Here!
Missing the connection to our other Journey Study today?
Catch up with Singing Israel’s Song!

This is Worship IV Week One!
Don’t miss out on the discussion!
Sign up to receive every GT Journey Study!