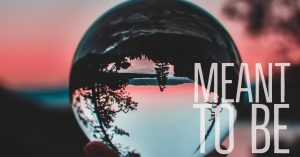 Have you ever had one of those days where everything just seems to be going wrong?

You know the kind of days I mean?  It’s not necessarily anything major, just day-to-day frustrations mounting up: traffic delays, work overload, uncooperative people, failed plans, underlying worries- the kind of day when despite your best efforts nothing seems to work and you wonder why everything has to be so hard.

Of course, sometimes it is the major things.  As we look at the world, at those around us, or even at our own lives, there is plenty of brokenness to see:
war, cancer, divorce, abuse, racism, poverty… the list goes on.
No matter what we do to try and make life work, it just feels like something is broken.

Surely this is not how it is meant to be.

Often the only way we can make any sense of our individual stories is by seeing them in the context of God’s big story, and as we look at the opening chapters of the Bible, we can see that our instinct is right.
This is not how it is meant to be.

God created Adam and Eve in His image:
to be in relationship with Him and with one another,
to enjoy the good things He had given them,
to be fruitful and multiply,
to reign and rule over His creation.
He looked around and He was satisfied.  It was very good.

That is how it is meant to be.  If only it could have ended there…
But there was an enemy, and Eve was deceived.

Despite the fact that she was already made in God’s image, Eve was persuaded that eating the fruit would make her like God, so she succumbed.  She ate, then offered the fruit to Adam, and the perfection of God’s creation was shattered.

Trust and intimacy were replaced by shame and fear;
openness was exchanged for hiding;
their relationships with God, with one another, with the world,
and even with themselves
were broken.

The fallout was catastrophic as that first sin led to a domino effect of sin through the ages!  The disease infects us all, and none of us are immune.

This is the world we are born into:

The story could have ended there.
It would have been perfectly understandable for God to have left us in our mess,
or even to have destroyed us,
but fortunately He had another plan and He chose a different way…
a way of restoration.

Because of His unfailing love,
He chose to pursue us and to bring us back,
which means there is hope,
even in our broken stories.

Right from the moment Adam and Eve sinned there are glimpses of it.
There is the promise of One who will come, the offspring of the woman, who will bruise the serpent’s head (Genesis 3:15).
There are garments of skin God makes to cover Adam and Eve (Genesis 3:21), which meant a sacrifice: death of the innocent to cover the guilty.

While Adam and Eve couldn’t possibly have understood at the time what this meant, looking back, we can see.

God sent Jesus, born of a woman, to defeat evil and “to destroy the devil’s works” (1 John 3:8), and it is through His ultimate sacrifice on the cross,
the innocent dying for the guilty,
that we can be forgiven and restored to right relationship with God.

While Adam and Eve’s sin had far-reaching consequences,
Jesus’ sacrifice was even more momentous:
“For the sin of this one man, Adam, caused death to rule over many. But even greater is God’s wonderful grace and his gift of righteousness, for all who receive it will live in triumph over sin and death through this one man, Jesus Christ.”  (Romans 5:17 NLT)

We may not see exactly where God is at work in our broken situations,
and sometimes our hearts ache for restoration,
but we can hold onto hope,
knowing that His love never fails,
and that no matter how great the sin and the brokenness we see around us,
Jesus’ power is greater.

And while we may not understand all that happens in the middle of our stories,
we have the reassurance of knowing how the story ends.
Because of Jesus’ death and resurrection, one day we will live in a reality
free from pain, suffering, and death,
restored to a perfect relationship with God forever,
and to a life that is, finally, how it is meant to be.

Thanks for joining us today as we journeyed into Woven Week One! Don’t miss out on the discussion below – we’d love to hear your thoughts!

Oh, the beauty of the gospel—Hope in our brokenness. Lovely truths, Lesley. ((hug))

Thanks for visiting, Brenda!

Beautiful post, Lesley! Hoping for restoration and trusting in Jesus’ power alongside you.

I’m looking forward to the day when life is truly how its meant to be. Can you imagine? Thanks for inviting our thoughts to the throne of Jesus, toward heaven. #HeartencouragementThursday

It is amazing to think about! Thanks for your encouragement, Kristi!

Hi Lesley. I’m so grateful God didn’t leave us in our mess or destroy us but instead chose a way of restoration! Thank you for this encouraging reminder that “we can hold onto hope, knowing that His love never fails, and that no matter how great the sin and the brokenness we see around us, Jesus’ power is greater.” Love and hugs to you!

Hi Trudy, thanks for visiting me here! I’m glad it encouraged you! Love and hugs to you too!

I am reminded of the song, “The potter wants to put you back together again” by Tremaine Hawkins. By the first man Adam, we were broken, but thank God for Jesus, the second man who came to make us whole.

Thanks for sharing about the song, Calvonia! I’m not familiar with it but I’ll look it up and have a listen!

Hi Lesley,
I’m so glad that God meets us in the middle of our stories and redeems what we think is broken or lost or gone forever. Reading his words show us that he will go to great lengths to show his love for us and I’m so grateful for that abundant love!

Thanks, Valerie! It is encouraging to know that nothing is beyond his redemption and his love never gives up!

Beautiful truth! I’m re-reading The Jesus Storybook Bible each night at bed time, and Sally Lloyd Jones describes the fall so plaintively from God’s perspective for when Adam and Eve broke His law, they broke His heart. So thankful that this was NOT the end of the story and that the narrative arc of Scripture is one of redemption and restoration!

Yes, I’m glad it is not the end of the story. I’ll need to look at the Jesus Storybook Bible. I’ve heard good things about it and had a flick through but I’ve never read it properly.

I do look forward to that day, Lesley! Thank you for your inspiring words. They bring encouragement in the midst of our ongoing struggles.

Thanks, Beth! I’m glad it brought you encouragement!