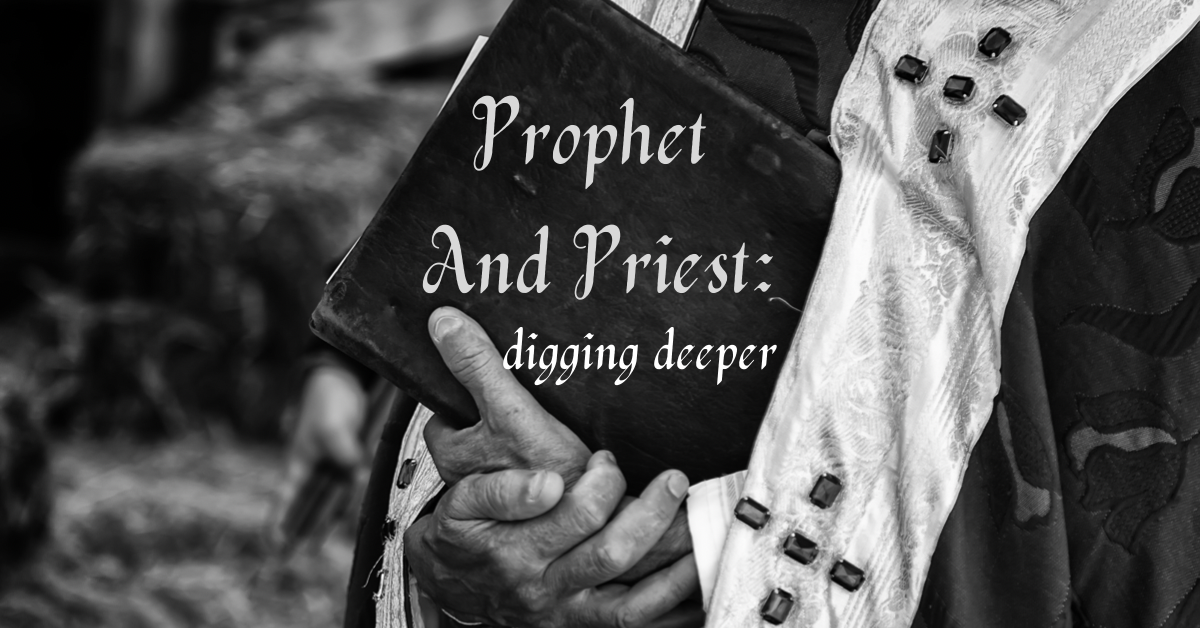 Today is 2-for-1 Friday!
Check out Prophet & Priest!

1) What does it mean that both Jews and Greeks “are all under sin”? (verse 9)

3) If we are all considered worthless (verse 12), every single one of us, what hope do we have?

1) What does it mean that both Jews and Greeks “are all under sin”? (verse 9)
When God created man, He “saw all that He had made, and it was very good indeed.” (Genesis 1:26-31) But, what was good became corrupt through the disobedience of the first man and woman in the Garden of Eden. (Genesis 3:8-19) From Adam’s offspring through every generation, the curse of sin is on us all. (Romans 5:12) God’s glory was revealed through what He created, and He has been showing people Who He is since the beginning. (Psalm 19:1-6 and Romans 1:20) Paul, the author of the letter to the Romans, wanted the Jewish readers to understand that everyone was in the same sinful condition whether they were Jew or Greek. (“Greek/Gentile” = not Jewish) His focus was to reveal God’s plan of salvation for all people. The prophets of old were tasked with speaking God’s Word to people. (Hebrews 1:1) Their message included proclaiming God’s truth and revealing His plans for their future. Although Jesus fulfilled the prophets’ message by coming to the Jewish people, His ministry was not limited exclusively to the Jews. In the Gospels (Matthew, Mark, Luke, and John) there are several occasions where Jesus ministered to Gentiles. This is a significant element of the Gospel message! (Matthew 15, Mark 5, Luke 7, John 4) Paul knew there were many advantages God had given to the Jewish people by entrusting them with written revelation before Jesus came to earth. Which is why he spent so much time reminding them of their sinful condition in the first two chapters. God had given the Jews much, but they were still just as rebellious and sinful as the Gentiles. Since Paul was born a Jew (Philippians 3:3-6), he refers to himself along with other Jews in verse 9. and communicates that both the pagan and the moralist are “all under sin.” Every person born since Adam is under the power and guilt of sin.

2) What was Paul emphasizing in verses 10-12 by quoting from Psalm 14:1-3 and Psalm 53:1-3?
The apostle wanted his audience to grasp the depths of sin that had touched every part of mankind’s being. The psalmist indicates in Psalm 14:2 that God looked for those who were seeking Him. When God sought righteous people, what did He find? “All have turned away; all alike have become corrupt.” (verse 3) When Paul declares there is “no one righteous, not even one” in verse 10, it isn’t that God couldn’t find a righteous person. There were none. No one had a righteousness of their own that could save them from God’s punishment and anger toward sin. It is likely that many readers were familiar with the passages Paul quoted from Psalms. He was using God’s words through the psalmist to emphasize the truth about humanity. God had revealed the heart condition for all of them. The psalmist continues in verse 5 that the unrighteous ought to be “filled with dread, for God is with those who are righteous.” What a dilemma we are all in! The human condition, apart from Christ’s righteousness, is not a happy picture. It’s a dreadful situation that is necessary to understand in order to grasp the depths to which God went to redeem us.

3) If we are all considered worthless (verse 12), every single one of us, what hope do we have?
I’m thankful the Bible does not start with verse 12, which is the reason we remind ourselves of humanity’s beginning. It is important for Genesis to be our starting place for understanding as we approach this passage in Romans. As we learned from Question 1 above, being created in God’s image (Genesis 1:27) was beautiful and good. As humans, we are valuable and precious to God, but through the choice of Adam and Eve, all humanity was led away from God’s purpose and purity into a worthless condition. What was once glorious and good, created by the Master Artist, became corrupt, twisted, and broken. We still bear His image as humans (Psalm 139:13-16), but we took an evil turn. It is in this state we have become worthless spiritually. Thankfully, Romans 3 has more to say about human sinfulness and depravity. Paul’s long explanation about our separation from God’s righteousness leads straight to the good news! The goal of Paul’s words wasn’t to damage the heart and soul of the audience, but to educate and encourage it. After this bad news was given, Paul spent much of the letter revealing the heart of God to rescue His people from their state of spiritual death. The word “God” occurs 153 times in Romans, more frequently than any other New Testament book. Bible commentator Leon Morris said, “God is the most important word in this epistle. Romans is a book about God. No topic is treated with anything like the frequency of God. Everything Paul touches in this letter he relates to God. In our concern to understand what the apostle is saying about righteousness, justification, and the like we ought not to overlook his tremendous concentration on God. There is nothing like it elsewhere.” (The Epistle to the Romans, by Leon Morris)

1) What does it mean that both Jews and Greeks “are all under sin”? (verse 9)
Every person is born with an instinctive bent toward rebellion, self-interest, and disobedience. Not even the priests were sinless. They had to offer sacrifices for their own sins as well as the people. (Hebrews 5:1-3) Paul admits later in this letter that even though he had been made right with God through Jesus’ death, he was still incapable of doing the good and righteous things he desires apart from total surrender to Jesus’ power at work within him. (Romans 7:15-24) Because we are born with a sinful nature, we must acknowledge God through prayer and studying Scripture in order to discover His way for us to be made entirely new. (Galatians 5:13-17) As we reflect on our sinfulness as human beings, we will be drawn to the redemptive message of the gospel. As God’s image-bearers, we are all equal in worth, and yet we are all fallen through sin.  As His image-bearers, we are all made to glorify and magnify the Lord. Even though we all fall short of God’s glory and need His forgiveness, we are all justified in the very same way, by faith in Jesus’ death on the cross in our place. (Romans 3:23-24) Oh, what a hope we have and can proclaim for we are not left to this hopeless condition! We do not need to depend on ourselves to save us!

2) What was Paul emphasizing in verses 10-12 by quoting from Psalm 14:1-3 and Psalm 53:1-3?
Some people have deceived themselves into thinking humans will naturally seek after God, or that we are actually “good” at our core. It is likely many of us have met someone who has initiated a search for significance outside of the true God. Maybe that someone is us! When we read verses 10-12 depicting our hopeless condition, we probably don’t want to break out in a joyful hymn of praise. The words may leave us feeling helpless to ever find joy. They certainly do not automatically provoke the feel-good theme we find in Mary’s proclamation in Luke 1:46-48, “My soul magnifies the Lord and my spirit rejoices in God my Savior, because he has looked with favor on the humble condition of His servant. Surely, from now on all generations will call me blessed.” But they should! When Mary recognized her human condition, it led her to worship the Savior of her soul. She realized her salvation was undeserved and flowed from the heart of a gracious, generous, and good God. She did not feel dread … she felt blessed! And THAT’S the difference faith in God’s salvation makes.

3) If we are all considered worthless (verse 12), every single one of us, what hope do we have?
The focus in these four verses is the bad news of Paul’s letter. The reality is that perfect righteousness is impossible for us to attain on our own. Oh sister, whatever you do, please don’t stop at verse 12! There’s good news to come! Even though it is true that we have no ability to achieve righteousness in and of ourselves, we can still be made right! Even though sin makes us spiritually broken, Jesus exchanged our sin for His perfect righteousness so we can one day stand before God in the righteousness of Christ. To the uninformed reader, Paul’s words threaten our feelings of worth. Maybe some of you have been told you are worthless. And maybe you have believed it.  For you to read those words of Paul, you may bristle at the thought. There is no question, Paul’s words are disheartening, which is why we would never want to isolate them from the rest of what we read in Scripture about God. We have all been created in the image of God. We must never forget that. This is the correct filter we must use to understand our spiritual condition. Lauren Daigle sings, “the only thing that matters now is everything You think of me. In You I find my worth, in You I find my identity.” (You Say by Lauren Daigle) Paul emphasized God in Romans because He’s where the joy is found. He is our Redeemer. The “self-esteem” worldview will leave us lacking, friend. It is not the solution to wholeness. “What a wretched man I am! Who will rescue me from this body of death? THANKS BE TO GOD through Jesus Christ our Lord!” (Romans 7:24-25)

What do YOU think?! Share Here!
Missing the connection to our other Journey Study today?
Catch up with Prophet & Priest!

This is Enough Week One!
Don’t miss out on the discussion!
Sign up to receive every GT Journey Study!