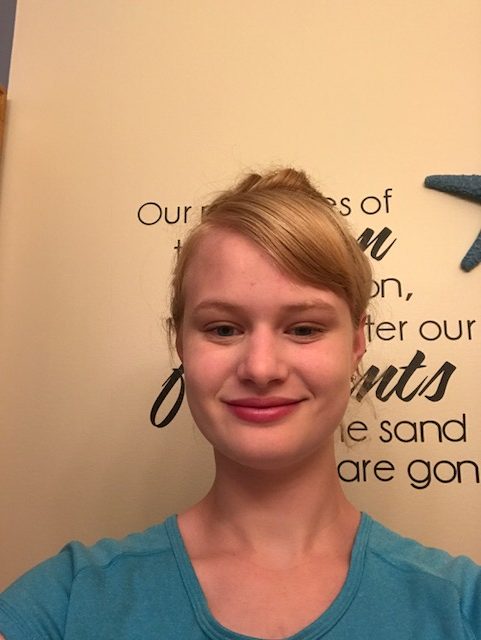 I was lucky to grow up in a kind and loving Christian family. As a result, a lot of people think my life is sometimes nothing but sugar sweet moments and that I know nothing of reality.

That is so wrong. When I was very young, my mother was pregnant with a baby who would’ve been my third sister. She would’ve been the youngest. Because she was born with terrible heart problems, she was rushed to Children’s Mercy, where she had multiple surgeries, but they weren’t enough. My sister, Megan Marie Feldmann, died in the hospital, and she is buried in the Second Creek Cemetery.

I was too young to process so much of that grief, and for the longest time I not only refused to go anywhere near her grave, but I also refused to talk about her to anyone who asked. I couldn’t tell the story without bursting into tears.

Later when I was in sixth grade I was diagnosed with a poorly functioning gallbladder which caused me serious health problems throughout middle school. Twice I was close to having the gallbladder removed due to attacks that caused terrible pain.

In my eighth-grade year, both of my best friend’s grandpas died as a result of problems linked to smoking. I became the shoulder for her to cry on. I tried to be the strong one for her, even when I was not.

It’s easy to make judgments of others based on what you perceive from the outside, but we are called to love deeply, and often that means seeing their perspective. Stereotyping people based on an outward appearance isn’t fair to them. Maybe you see an angry person on the street telling people they’re going to hell, or you meet someone who thinks that if you make one mistake you’re an awful person forever; we are called to love these people, not unfairly judge them.

I’ve been through a lot more than I’ve mentioned above. Though it hurt, my sister’s death made me emotionally vulnerable to other people’s pain and allowed me to read people better. I notice other people when they are hurting, and I can try to help them. My health issues also allowed me to grow closer to God. If I was having an attack or recovering from one and would not be able to sleep, I would cradle my body that was wracked with pain, and pray to the dear Lord for sleep and rest for my weary body.

I’ve suffered! I’ve had lots of pain in my life, but if I had not walked closely with God in those times, I would not be the person I am now, the one who can write this narrative.

So, yes, it’s no miraculous story like the ones I write or that others have, but it’s mine.
Though to be quite honest, this isn’t even my story.
It’s His.

This life, these first-world-privileges, everything, is all a gift and they belong to Him.
We are privileged to even be a part of His story!

So, from that perspective, this may be the role I’ve been given to play, but I can only hope that I can play the part He’s assigned for me and try to live out one memorable story. My heart’s desire is to help lead others to realize their part in the amazing love story about God and His people who fell, but whom He still loved enough to sacrifice His son, paying the eternal price, that they may have a relationship with God and an eternal home.

Through my pain, I’ve discovered writing as my gift and talent in life! My life’s purpose is to honor God through the written word. Through books, short stories, poems, you name it—I can find a way to write so that you will cry, smile, laugh, or connect with Father God. Through my experiences, I’ve grown in my faith and understanding of life, perhaps you will see Him through me too.

Want to study with us? Sign up for daily Journey Studies!
Want to read more stories like Sarah’s?