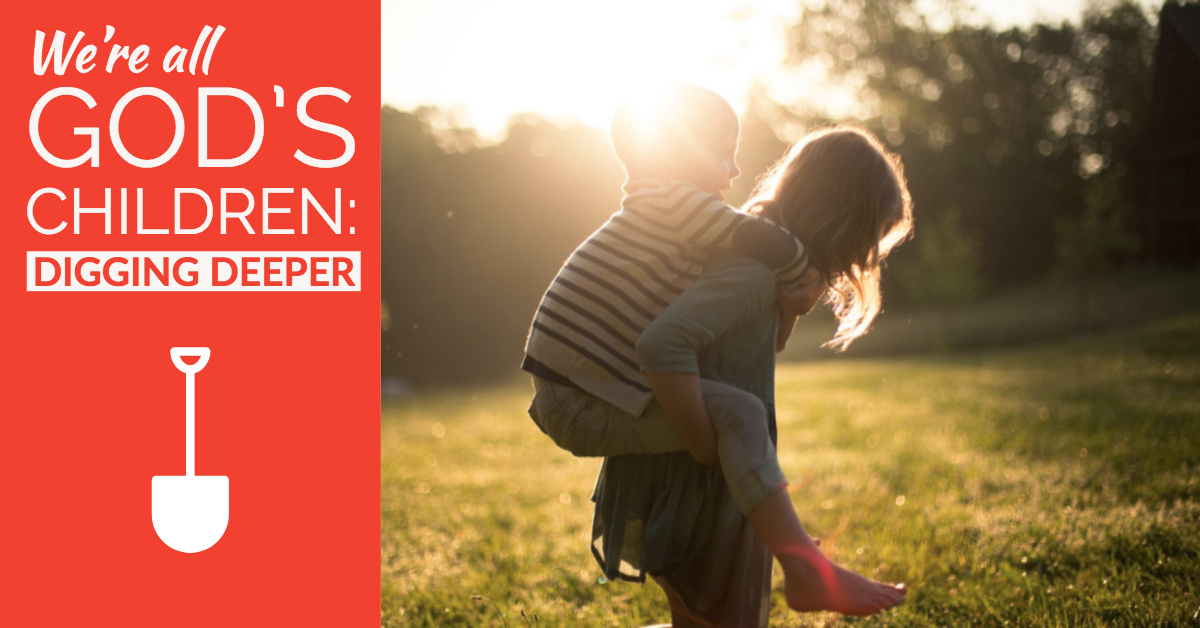 Today is 2-for-1 Friday!
Check out We’re All God’s Children!

1) What are the narrow and wide gates?

3) Why won’t people who call Jesus “Lord” enter Heaven? How can we
be sure we will go to Heaven?

15 “Be on your guard against false prophets who come to you in sheep’s clothing, but inwardly are ravaging wolves. 16 You’ll recognize them by their fruit. Are grapes gathered from thornbushes or figs from thistles? 17 In the same way, every good tree produces good fruit, but a bad tree produces bad fruit. 18 A good tree can’t produce bad fruit; neither can a bad tree produce good fruit. 19 Every tree that doesn’t produce good fruit is cut down and thrown into the fire. 20 So you’ll recognize them by their fruit.

1) What are the narrow and wide gates?
In ancient cities of Jesus’ day, thick walls were built around the cities as means of protection. Entrance could only happen by entering the city gates, which were also constructed with security in mind. Large gates allowed anyone and everyone to pass into the city. Security was low and thieves could easily go in un-noticed amongst the pressing throngs of people and animals. Narrow gates were used in selective areas in the wall for times of heightened security. These gates were highly guarded, were very narrow, allowing only 1 person or animal to pass through at a time. There would be no sneaking past a guard here!

2) Who are the “false prophets”?
This description of false prophets parading around in sheep’s clothing wasn’t a fanciful way of being creative with word pictures, it was reality in Jesus’ day. In Old Testament times, there was a Babylonian garment made of sheepskin that reached all the way to the floor, completely concealing the identity of the person. The Talmud (an ancient historical document that kept record of oral tradition) says of this garment, “it was the way of deceivers, and profane men, to cover themselves as if they were righteous men, that persons might receive their lies.” (Studylight.org) Jesus again uses a then-current-day physical reality to describe a spiritual deficit. In Jesus’ day, Pharisees and Sadducees and other religious leaders had an ornate display of spirituality, but they pushed people to following rules rather than pointing people to the hope of an eternity with God through a relationship with Him. These were false prophets. Paul and other disciples encountered false prophets regularly as they traveled around growing churches. People would use the law of Moses against new believers, insisting that they must be bound by strict rule in order to have an inheritance in Christ.

3) Why won’t people who call Jesus “Lord” enter Heaven? How can we be sure we will go to Heaven?
My grandfather was famous for saying, “everyone who talks about streets of gold isn’t going there.” He meant that just because you use the right “Christian terminology”, go to church, own Bibles, listen to sermons, and even say you know God, none of that means you are a true Christ follower. It’s easy to walk through the “wide gate”, wear “sheep’s clothing”, and look like a religious person to everyone else, but God judges our hearts. According to Jesus in these verses, the outcome of “pretending” without genuine heart change is to be forever cast out from the presence of the Lord. That’s serious business! Forever without hope isn’t a game worth playing or a risk worth taking. Life is fleeting and we never know when we will breath our last and our opportunity for walking through the narrow gate will forever be over. Jesus says in verse 21 that “only those who do the will of my Father in Heaven will enter the kingdom of Heaven.” What is that mysterious “will” He is inviting us to do to gain access into eternity with Him? It’s not a mystery at all; it’s been made clearly known to us through Jesus Christ! Paul, in Ephesians, answers the question of this mystery, “In him we have redemption through his blood, the forgiveness of our trespasses, according to the riches of his grace.” The will of God is that you surrender to Him, that you seek His redemption, that you walk through the narrow gate and become His child! Be sure that Jesus is yours today, and that you are His!

1) What are the narrow and wide gates?
Jesus uses this then-current-day familiar metaphor of wide and narrow gates to describe what it’s like to enter into the Kingdom of Heaven. The wide gate leads to destruction, but everyone is heading that direction. It’s easy to spot, it looks like the main entrance, and there are no guards to say whether you can or cannot enter. What are some “wide gates” you can identify in our modern culture? But the narrow gate is what Jesus refers to as being the only way to enter the Kingdom of Heaven. It’s narrow, easily overlooked, and appears difficult. Entrance can only be made if you are willing to be fully known; exactly what it’s like to ask Jesus to be your Savior. We must admit who we are before God, that is sinners in need of a Savior. Just as we are known, we are welcomed, having been granted access to the Heavenly Kingdom of Life! We all must choose a gate, even not “choosing” the narrow defaults us to choosing the wide one. Where are you in the process of choosing a gate to walk through?

2) Who are the “false prophets”?
False prophets are not limited to the historical period of the early church, but are increasingly pervasive today. In our culture, we have a wide spectrum of false prophets ranging from cults to even religious leaders within some of our own churches. False doctrine is everywhere and false prophets are those who perpetuate that doctrine. This passage teaches that we will know and recognize false prophets “by their fruit”, that is, the outcome of their lives. When a life is being lived out in clear contradiction to the truth of the Scripture, it’s easy to spot false from true IF we know what true is. Studying the Bible for ourselves is not only essential to our own sanctification as we become conformed to the image of Christ, but it’s also critical to being able to discern truth from a lie. How is your personal study of God’s Word going? If you’re feeling a little stuck lately, consider diving into one of these excellent resources to help jumpstart your study time! (Devotional Classics; My Utmost For His Highest)

3) Why won’t people who call Jesus “Lord” enter Heaven? How can we be sure we will go to Heaven?
As Sara mentioned in today’s Journey Study, “we can’t just believe in God” as she referenced James 2:19 where it says that “Even the demons believe—and they shudder.” Many of us are guilty of this at one point or another in our lives. We believe there “is a god” or maybe we believe a lot of stuff about Him that we really aren’t sure how (or if) we can support those claims with a Bible. But the lynchpin question for your eternal destination and mine comes down to the same one Jesus asked Peter, “Who do you say that I am?” Not the academic answer, not the “right” answer, not the answer you’ve heard other people say, but your answer, the one from your heart. In your deepest heart, who do you say that Jesus is? A good man? A prophet? A radical? Or the Son of the Most High God, co-equal with God, having existed from before time began and will continue to do so for all eternity. Who is Jesus and what will you do with His invitation to come through the narrow gate and enjoy fellowship with Him for eternity?

What do YOU think?! Share Here!
Missing the connection to our other Journey Study today?
Catch up with We’re All God’s Children!

This is Misunderstood Week Three!
Don’t miss out on the discussion!
Sign up to receive every GT Journey Study!