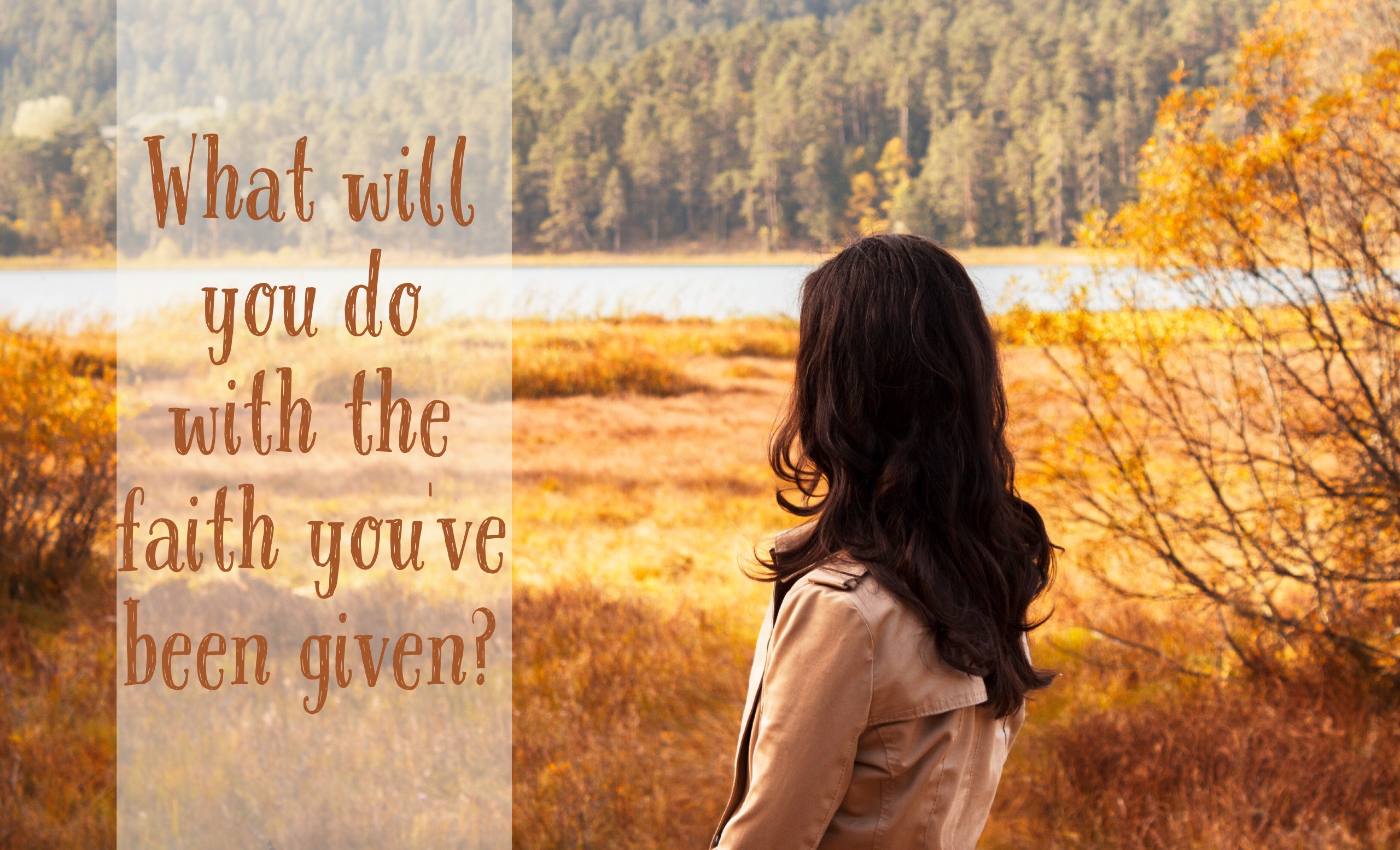 Fridays are 2-for-1! Check out the other Journey Post, Faith In Action!

14 What good is it, my brothers, if someone says he has faith but does not have works? Can his faith save him?

15 If a brother or sister is without clothes and lacks daily food 16 and one of you says to them, “Go in peace, keep warm, and eat well,” but you don’t give them what the body needs, what good is it? 17 In the same way faith, if it doesn’t have works, is dead by itself.

18 But someone will say, “You have faith, and I have works.” Show me your faith without works, and I will show you faith from my works. 19 You believe that God is one; you do well. The demons also believe—and they shudder.

20 Foolish man! Are you willing to learn that faith without works is useless? 21 Wasn’t Abraham our father justified by works when he offered Isaac his son on the altar? 22 You see that faith was active together with his works, and by works, faith was perfected. 23 So the Scripture was fulfilled that says, Abraham believed God, and it was credited to him for righteousness, and he was called God’s friend.

1) It seems like James questions the validity of being saved by faith alone. What is his intention and what is true?

2) What it meant by the phrasing, “the demons also believe and they shudder”?

3) What does it mean that Abraham was justified by his works?

1) It seems like James questions the validity of being saved by faith alone. What is his intention and what is true?
The entire premise for the book of James is that faith without works is not faith at all. There is a strong tension here. While we can look all over the entire Bible to see that faith alone saves our souls, and is not based on any good work we can do because everything we do is utterly tainted with sin, James insists that the intrinsic definition of faith in Christ is radical transformation. This transformation cannot be divorced from faith. Even the thief on the cross who died shortly after Jesus said “Today, you will be with me in Paradise” (giving him salvation), was radically changed enough to bear witness to the holiness of God to the other man dying beside him. The man who asked Jesus to be His Savior, had no time left in life to get baptized, be circumcised, go to the temple, donate money, or memorize God’s Word, but his transformed heart still manifested itself because he was motivated to speak about Jesus!

2) What it meant by the phrasing, “the demons also believe and they shudder”?
Demons “believe” in God as is clearly evidenced elsewhere in Scripture. They know exactly who God is and they equated Jesus with being the very Son of God, even when others questioned it. Satan and all of his demonic forces know exactly who God is, but they know full well that they have zero power over Him. James wanted his audience to see that belief in God is not enough for eternal security, rather an entire heart transformation is necessary, which only happens by entering into a real relationship with Jesus through faith in His sufficient work on the cross.

3) What does it mean that Abraham was justified by his works?
God had made Abraham a significant, humanly impossible promise in Genesis 15:5-6 when He promised Abraham that his offspring would be as numerous as the stars. At this pivotal point, Abraham responded with his whole heart and he believed the Lord, which God counted as righteousness. Abraham’s faith brought Him into a relationship with the Holy God, not works. (Romans 4:21-22) But Abraham’s faith showed up by significant “work” when God asked him to sacrifice his only son, the promised seed through which the countless offspring would come. Because of Abraham’s genuine faith, he was able to follow through when asked to live it out in an action that would slay his son. Abraham’s obedience proved the authenticity of his faith because without it, his faith would have been meaningless.

1) It seems like James questions the validity of being saved by faith alone. What is his intention and what is true?
Our biggest takeaway from the book of James is close self-examination. Jesus Himself warns that many will claim Him as Lord, but Christ will deny them because their faith was not genuine. (Matt 7:21-22) We don’t need to live in fear that we aren’t God’s if we’ve fully trusted Him, but examining our lives to look for Christ’s passions fueling our transformation is critical. Are we submitting to His lead? Are our actions matching our speech? Is faith overflowing in our everyday?

2) What it meant by the phrasing, “the demons also believe and they shudder”?
James is driving home the point that simple knowledge about God, even fearing God, isn’t enough either for salvation or transformative living. As you think about your heart condition, ask yourself who do you say God is? Is there more than just a “knowing” of who He is? Have you given Him permission to transform you? Are you walking in that transformative living?

3) Am I justified by my works?
Just as Abraham’s faith would have been meaningless without his obedient actions, so is ours. Take time to consider what your next steps of obedience are when it comes to your own faith. Has God been prompting your heart lately to follow Him, to get messy for the sake of His kingdom, to love the unlovable, to serve at church, to make quiet time in prayer a priority? Follow through with where He is leading, you will be blown away by the blessing of living a repurposed life!

Don’t miss today’s other Journey Study, Faith In Action!
Sign up to receive every Journey to your inbox!

Thanks for joining us today as we journeyed into
Repurposed Week Three!
Don’t miss out on the discussion – we’d love to hear your thoughts!

Looking for other journeys from this theme?
See all past studies in Repurposed!