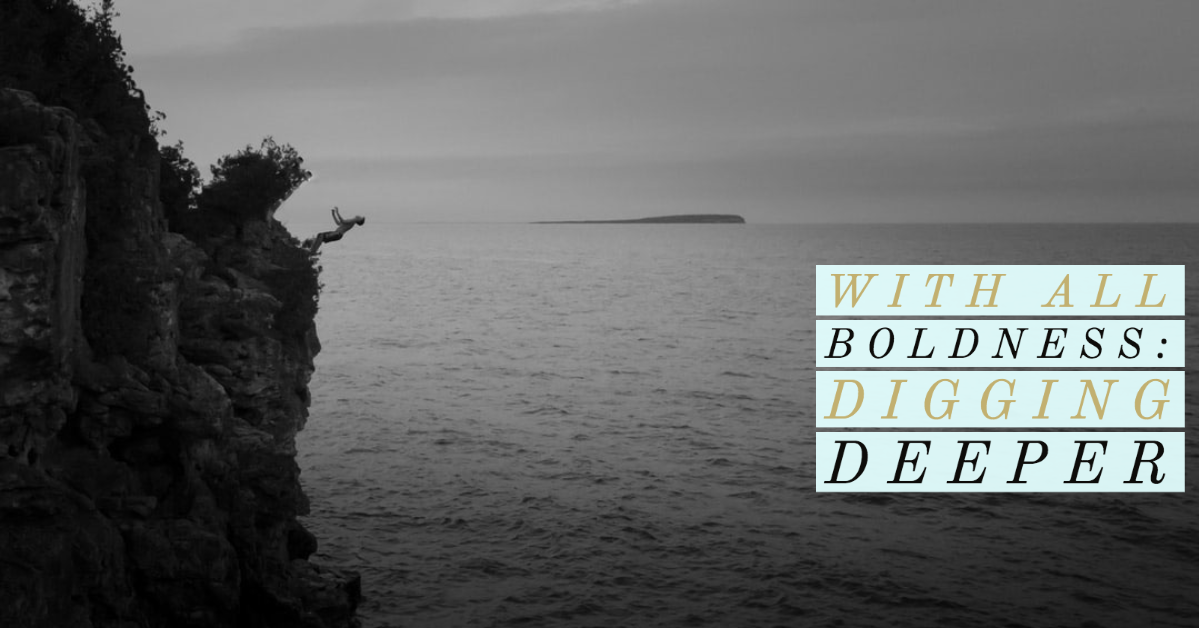 Today is 2-for-1 Friday!
Check out With All Boldness!

1) How do these verses connect with the theme of Shielded and With All Boldness?

2) What is the difference between “perfect peace” and “peace”?

3) What reasoning is given for us to trust the Lord?

You will keep the mind that is dependent on you in perfect peace, for it is trusting in you.

4 Trust in the Lord forever, because in the Lord, the Lord himself, is an everlasting rock!

1) How do these verses connect with the theme of Shielded and With All Boldness?
In today’s Journey Study, Merry discusses Paul’s request of the believers to pray for his own boldness as he shares the gospel. While Paul had been given the perfect armor of God to guard him and help him fight spiritual battles, he still had to make the choice to stand firm and stay engaged in the battle. The Lord’s armor will not benefit us in battle if we decide to stay out of the war, choosing to stay back instead of standing firm. (Ephesians 6:13-14) Given this reality, Paul beseeched his fellow brothers and sisters in the faith to fervently pray for his boldness in preaching Christ just as he had been commissioned. (Ephesians 6:19-20) Isaiah’s words here are part of a victory song Israel was to sing when God would finally bring redemption for them. They were looking forward to a time when they would be experiencing God’s victory firsthand and they would finally be free from all enemies and wars. There is strong encouragement in these short verses! While troubles attack on all sides, the Lord reminds His people all they need to do is trust Him, leaving the weight of their mind and emotions on Him. In return, He will give perfect peace. The same God who would win their victorious redemption would be present with them while they waited.

2) What is the difference between “perfect peace” and “peace”?
Perfect peace, in the song of Israel, was given directly from God when they relied fully upon Him, resting their minds on Him alone. This “perfect peace” could exist regardless of any extenuating circumstances as long as the person trusted in God. Later in the song, verse 12 gratefully shouts, “O Lord, You will establish peace for us, for You have also done all our work for us!” The peace referenced in verse 12 was a peace from war and enemy strife that hadn’t yet been realized, yet Israel’s song confidently asserted the Lord’s victory. The cease-fire would come from the Lord, peace in the land would be theirs. In both scenarios, this battle for victory and peace would not be won by their own power, strength, or cunning military strategies. While both are anchored firmly in confident trust of the Lord, only one is considered “perfect peace”. Perfect peace is given by the Lord, regardless of military victory. This is a soul peace, resulting not in conquest over land, but conquest over the battle of their hearts and minds.

3) What reasoning is given for us to trust the Lord?
Isaiah’s song declares, “..In the Lord, the Lord Himself…” (verse 4) as the foundation for reasons to trust God with such a critical component of our inner selves, our minds. The Lord does not point to something outside of Himself, or something else in addition to Himself, rather, our full satisfaction is found entirely and wholly in precisely WHO God is in every aspect of His character. Israel needed no weapon, no vast army, no team of horses, no chariot, and no valiant army in order to give them unshakeable peace. Ironically, even if they had all of these things, they wouldn’t have “perfect” peace because their peace would be dependent on changing variables. In sharp contrast, God calls them to place their full dependence on Him and His character, looking no farther than Himself. After laying this foundation, Isaiah continues, “…(the Lord) is an everlasting rock.” (verse 4) The description of rock is not merely a pebble or a stone, rather in the terrain familiar to Israel, the imagery of enormous boulders would have come to mind. Truly immoveable. Nothing can change the character of God, what He is, He will always be. What He declares as true, will forever be true. Of all creation, nothing offers what God, the uncreated, pre-existing God offers: immovability.

1) How do these verses connect with the theme of Shielded and With All Boldness?
I love running. I love how I feel when I go and its lingering affects when I get back from a solid run. However, my mind is often my enemy. “It’s too cold, it’s too hot, it’s too hard, I’ll be sore, I have more important things to do”, and on goes the list of mind games attacking my morale and dedication. I have all the equipment I need to run regardless of the weather, but often my emotional mindset sabotages me. This happens countless times in the arena of spiritual warfare. “God didn’t mean for me to use words to share the gospel, this isn’t the right time to talk about God, I’m too busy to attend community group tonight, I’m too busy to serve at church, that person doesn’t deserve me treating them with kindness”, and on goes our own list of justifications for not even engaging in the battle God has called us into. Sisters! Take stock of when and where your weak points are in the battle of your mind and take action against it! Call brothers and sisters in Christ to pray fervently for your boldness to stand firmly in the anchor of God’s promises and unchanging character. He will never leave us and will always exchange our fear or justifications for peace if we will honestly surrender it.

2) What is the difference between “perfect peace” and “peace”?
Perfect peace cannot be stolen away by an enemy. No fear exists in perfect peace. Perfect peace lasts when temporary peace slips way like sand in a fist. Perfect peace is only found in one place, the love of a God who does not change like shifting shadows. His feelings towards those who follow Him are forever benevolent, even though that seems impossible for us to comprehend! How drastically would it change the landscape of your heart to be wrapped in constant, unending peace?! Take some time over the next few days to reflect on these verses about God and the peace He offers when we rely fully on Him. Which passage speaks most strongly to you? Write it down on a notecard, write it with erasable marker on your mirror, memorize it, teaching your heart to hold onto truth! John 14:27, Isaiah 66:12, John 16:33, Colossians 3:15, Philippians 4:7, Psalm 29:11

3) What reasoning is given for us to trust the Lord?
In our fast-paced, me-focused culture, we don’t need to look very far to find all sorts of invitations to get away and find peace. We all want peace!! Everything from beverages, to silky lipstick, dream vacations, all types of apparel, various foods, or luxury apartments, everything shouts the lie that if we consume X, we will feel full and satisfied. How comforting are these timeless promises from God in Isaiah in contrast to all the noise and allure of more things?! The reality, as we’ve all experienced, is that regardless of how happy things or relationships make us feel for a time, eventually they leave us flat, unable to sustain us, especially when true trial and struggle hits. Training our minds to repeatedly remain steadfastly and wholly dependent on the Lord takes time and practice. Whatever our circumstance, He is our unchanging rock. The psalmist simply states, “Trust in the Lord at all times, O people, pour out your heart to Him!”. (Psalm 62:8) All the time. Take up the challenge to begin persevering in choosing to trust Him, intentionally taking your “everything”, good or bad, to the Rock who never changes.

What do YOU think?! Share Here!
Missing the connection to our other Journey Study today?
Catch up with With All Boldness!

This is Shielded Week Three!
Don’t miss out on the discussion!
Sign up to receive every GT Journey Study!