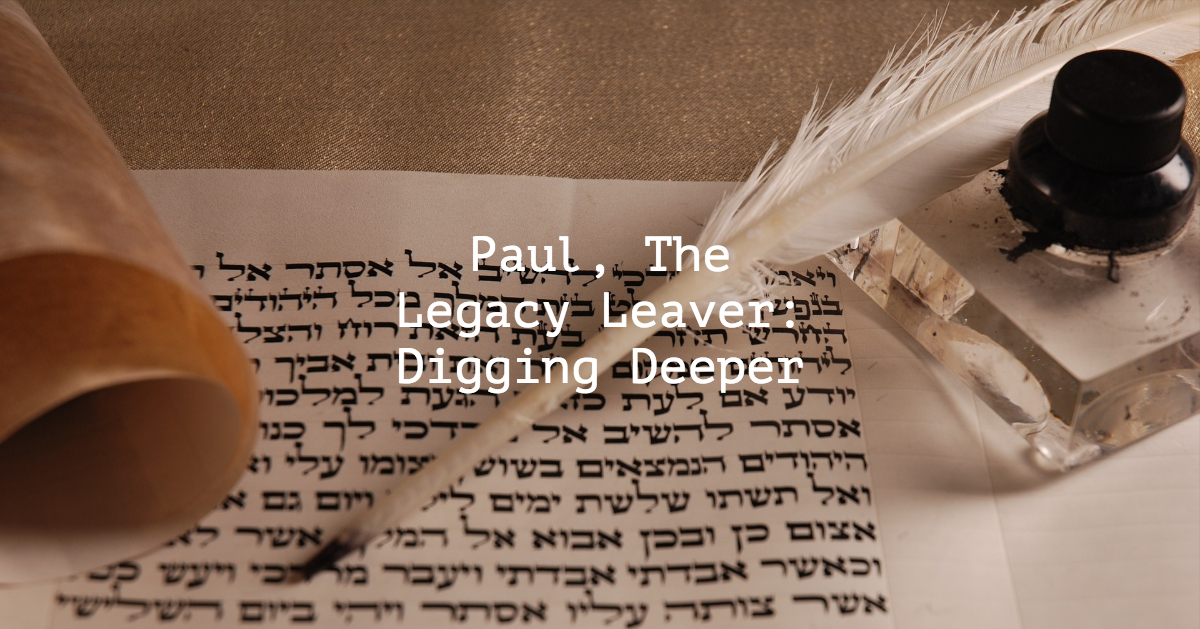 Today is 2-for-1 Friday!
Check out Paul, The Legacy Leaver!

1) Why is Paul rejoicing?

3) Considering the intense persecution upon the Philippians believers, how can Paul write for them to not be “frightened in any way by your opponents”? (verse 28)

Yes, and I will continue to rejoice 19 because I know this will lead to my salvation through your prayers and help from the Spirit of Jesus Christ. 20 My eager expectation and hope is that I will not be ashamed about anything, but that now as always, with all courage, Christ will be highly honored in my body, whether by life or by death.

21 For me, to live is Christ and to die is gain. 22 Now if I live on in the flesh, this means fruitful work for me; and I don’t know which one I should choose. 23 I am torn between the two. I long to depart and be with Christ—which is far better— 24 but to remain in the flesh is more necessary for your sake. 25 Since I am persuaded of this, I know that I will remain and continue with all of you for your progress and joy in the faith, 26 so that, because of my coming to you again, your boasting in Christ Jesus may abound.

27 Just one thing: As citizens of heaven, live your life worthy of the gospel of Christ. Then, whether I come and see you or am absent, I will hear about you that you are standing firm in one spirit, in one accord, contending together for the faith of the gospel, 28 not being frightened in any way by your opponents. This is a sign of destruction for them, but of your salvation—and this is from God. 29 For it has been granted to you on Christ’s behalf not only to believe in him, but also to suffer for him, 30 since you are engaged in the same struggle that you saw I had and now hear that I have.

1) Why is Paul rejoicing?
Contrary to everything we might think, Paul’s rejoicing is found in the seedbed of his suffering. Verses 12-18 dispel any doubt to his readers that Paul’s imprisonment makes the gospel out to be a lie. One might think that when Paul was punished for preaching, other believers would become terrified causing preaching and teaching to cease, but this was not the case. Paul states how his faith became known throughout the imperial guard. (verse 13) They knew he was innocent, imprisoned for his faith, not for wrong doing. Other believers, on seeing Paul’s embrace of persecution because Christ was worth it, were emboldened to also preach Christ with even more intensity. The gospel continued to be preached, despite his imprisonment and impending death. The early church “got it”; Christ was worth every price, and Paul’s inner being swells with rejoicing! Paul reiterates at the end of verse 18, “Yes! I will continue to rejoice because I know this will lead to my salvation through your prayers and help from the Spirit of Jesus Christ.” Paul rejoiced because the gospel being preached in spite of his chains only reinforced that Christ was worth it. His suffering would result in others’ salvation as they heard the good news and, for himself, his deliverance (salvation) was certain. Either he would be delivered from prison or he would be delivered via death into his eternal home. This was cause for great rejoicing!

2) Why would Paul be ashamed? Does he hope he won’t be ashamed?
“My eager expectation and hope is that I will not be ashamed about anything, but that now as always, with all courage, Christ will be highly honored in my body, whether by life or by death.” Facing death, persecution, jail time, beatings, and opposition don’t rank high on anyone’s “bucket list”, even for Paul. It wasn’t that Paul “sought after” suffering and then rejoiced in it to make an example for us of how to “suffer well” for Jesus. Neither is it that Christ wanted to “make Paul suffer” because of the way he had persecuted the Church before believing in Jesus. No, not at all. Paul had fears just like each of us. His prayer was that in the midst of the trial, no matter its intensity, he would continue to proclaim Christ with courage because he knew the reality of assured hope. Hope that was incorruptible from any amount of suffering. His “eager expectation and hope” isn’t that he would be “strong enough” or “good enough” to honor Christ, but rather that he would continue to die to himself and let Christ reign free in his body. His prayer was that he would perpetually submit himself to God’s Spirit in every situation, for only then is Christ honored regardless of circumstance.

3) Considering the intense persecution upon the Philippians believers, how can Paul write for them to not be “frightened in any way by your opponents”? (verse 28)
Paul declared that his circumstances weren’t about himself. What mattered most was the gospel being preached to all people for how could they believe if they do not hear? (Romans 10:14-15) By shifting the focus off himself and onto the mission, he was encouraging believers everywhere to do the same. The mission of preaching Christ wasn’t given to one man, or a group of people, but to the Church. Every Christ-follower, every land, every language, every time period in history past and future to come…this is the Church. And to her this mission is given. When we broaden our perspective to see through the lens, our lives become missional in purpose. The mission is preaching Christ and encouraging the body along the way as we daily live out the gospel with eternity in mind. Paul reminds, “As citizens of Heaven live your life worthy of the gospel of Christ.” (verse 27). This world is not our home, these struggles we face, the hardships we endure, they are fleeting and temporary. Fix your eyes on the end goal for in so doing, your circumstances and opponents become less important in light of the supreme value of the mission of Christ.

1) Why is Paul rejoicing?
Paul’s persecution was intense all throughout his ministry, yet he rejoiced because his highest aim was that Christ would be honored and the gospel would be preached. Whether he was dead or alive, had plenty or lived in want, (Philippians 4:12) his life focus remained the same. As believers, the Spirit of God desires to perpetually shape our hearts to become increasingly more focused on this goal as well. It can seem daunting to have that kind of passionate abandonment to Jesus regardless of cost, but it’s not something that comes immediately. As we’ve seen throughout Paul’s life in this Journey Theme, God lovingly shaped Paul’s heart all along the way, and He will faithfully do so for each of us as well. “Being confident of this, that He who began a good work in you will carry it on to completion until the day of Christ Jesus our Lord.” (Philippians 1:6) Pause to consider where your heart is on the journey. How does the gospel interweave with your daily life? What would it look like for you to have the uncontainable hope Paul had because of Christ?

2) Why would Paul be ashamed? Does he hope he won’t be ashamed?
You may not be facing beatings for professing Christ or an impending execution, but the trials we face are no less real or daunting. The heaviness of a marriage that feels broken beyond repair. Financial strain that pulls us down into fear and intense anxiety. The way we view our bodies, the shame of our past, or the unending cycle of everyday messy living are each trials. Through the lens of an unshakeable inheritance that will last forever, every trial for a believer is an opportunity for Christ to be on display in our lives. It’s an opportunity for the gospel to be declared even through our brokenness. Let Paul’s declaration become yours, “I will boast all the more gladly in my weakness, so that the power of Christ may rest on me. For the sake of Christ, then, I am content with weaknesses, insults, hardships, persecutions, and calamities. For when I am weak, then I am strong.” (2 Corinthians 12:9-10) Submit yourself to the Spirit as He shapes your heart to become more like His. Lean heavier on His strength!

3) Considering the intense persecution upon the Philippians believers, how can Paul write for them to not be “frightened in any way by your opponents”? (verse 28)
What is natural is to be frightened of death and suffering. What is unnatural, is to face daily life with an unflappable knowing that Christ is worth it. The Lord will use the terrible circumstances we find ourselves in to bring about a redemptive glory far beyond our comprehension. How do our circumstances stop sucking away our joy and freedom to live whole? The key isn’t found in circumstances, it’s found in the object of our gaze. The more we know Christ, the more precious He becomes. The more endeared we are to His heart, the more important His mission in our lives become. The more we give ourselves over to Him, the more we able to say with Paul, “To live is Christ. To die is gain.”  What aspect of your life is shrouded in fear? Take it to Christ. Where are you tempted to run away into the shadows of shame? Take it to Christ. What burdens are just too heavy to carry anymore? Take them to Christ. Shift your gaze to His face, become familiar with the rhythms of His heart, and let His redemption reign in your circumstances as you continue journeying Home.

What do YOU think?! Share Here!
Missing the connection to our other Journey Study today?
Catch up with Paul, The Legacy Leaver!

This is Sketched V Week Three!
Don’t miss out on the discussion!
Sign up to receive every GT Journey Study!