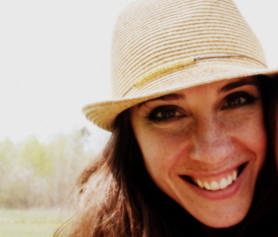 I was born to parents who had trusted Jesus as their Savior, but who were fairly new in their faith. I’ve been told that I trusted Christ as my Savior when I was about five years old, but I don’t remember that particular moment. I do know that for as long as I can remember, I have heard about my need to be redeemed from my sin and that Jesus was that redeemer.

However, though there was a spiritual foundation of sorts for me, storm clouds had been forming in my parents’ marriage well before I entered the world. My parents separated a couple times and by the time I turned ten, they divorced.

While I don’t have a lot of memories of early childhood, I distinctly remember the day my father moved out. With tears quietly streaming down my face, I stood at the window, watching as he took boxes to his car. My little world was in turmoil, but I didn’t know how to process the complexity of it all.

My mom took us to a Bible-teaching church, along with Wednesday night programs, youth group and Bible camps. These shaped my young faith and gave me a steady foundation in those early years.

God showed Himself to be a provider for us in countless ways: anonymous checks dropped in our mailbox, groceries handed to us after church, a loaned vehicle one year when we couldn’t afford one, and so many believers along the way who encouraged our family, walked alongside us, and mentored us. Even in those early years, I knew God was with us. I didn’t know this verse at the time, but learned it later that all along God had been “a father to the fatherless” (Psalm 68:5), to my sisters and me.

Junior high was a spiritual turning point for me as my faith started becoming my own, and I shared the gospel for the first time with two of my close friends.

My faith in Jesus continued to grow, but so did something else. I began loving and seeking attention from boys. Symptoms of my need to be loved, wanted and admired continued to surface throughout adolescence, whether in relationships, people-pleasing, or being a high-achiever. I grew into a young woman who excelled at much of what she put her hands to. But my deep need for control and affirmation was not yet apparent to me.

Throughout those years the Lord continued to be faithful to me and drew me nearer to Him despite my wandering heart. I learned that even “if we are faithless, He remains faithful—for He cannot deny himself” (2 Timothy 2:13).

During my senior year of high school, God brought a quiet, steady, faith-filled young man into my life. Sam and I had grown up together in church, but it wasn’t until we planned a youth trip together, that we had the opportunity to get to know one another. We began dating and both planned to attend the same Bible college the following year.

Our relationship continued and weathered through many learning curves, personal challenges, and changes during our college years. After both completing internships at Forest Springs Camp & Conference Center, we married in the summer of 2004. We worked for two years until God transplanted us back to be on staff at Forest Springs.

In the fall of 2007, I became a mother which set me on a decade trajectory of steep growth. Motherhood revealed more of me than I knew was there. It put the squeeze on all my notions that I could control my comfort, security, how my days went, how others viewed me, and essentially how my world would run. It revealed how incredibly unable I really was. It showed me I was not self-sufficient and I could no longer find comfort in lesser loves nor hide from my desire to do so. I began seeing the depths of my own sin in ways like never before. I walked through periods of depression and anxiety all along the way. But even through darkness, God led me to encounter His grace more deeply.

As my children, now five, seven and nine, have grown, I have continued to learn this cyclical lesson over and over. My life is not my own. It is Christ’s. As a follower of Jesus I am called to lay my life down so that He can raise it back up into something more beautiful than I could ever make it on my own.

The kicker is that it doesn’t always feel beautiful. Often it feels like a mess of two steps forward, three steps back. Thankfully, God’s spiritual growth economy isn’t linear. John Piper likes to say, “God is always doing 10,000 things in your life and you may only be aware of three of them.” So I keep waking up every day, choosing to place my hope squarely in the promises of God’s Word, that “He who began a good work within [me] will be faithful to complete it” (Philippians 1:6). When my eyes are on Christ and His kingdom purposes, I can more readily lay my life down, trusting in what He is working for my good and His glory.

God is unrelenting in His love for us and He will continue to rescue us from ourselves. He has continued to show me that He would need to be my joy despite circumstances (Philippians 3:7-8; Isaiah 51:3), that His affection would perfectly satisfy me (Psalm 73:25-26), and that He would be the one to hold me together (Colossians 1:17) as I continue to lay down my life.

Addendum: In the past five years the Lord has been prompting me in the area of songwriting both for my own personal worship and healing, and for the encouragement of the body of Christ. I wrote Lay it Down as a personal anthem based on Paul’s life declaration, “To live is Christ, and to die is gain” (Philippians 1:21). Have a listen!

Follow me! I’d love to connect with you!
SoundCloud: https://soundcloud.com/tawnya-smith-4
Personal Blog: http://tawnyasmith.blogspot.com/

Want to study with us? Sign up for daily Journey Studies!
Want to read more stories like Tawnya’s?