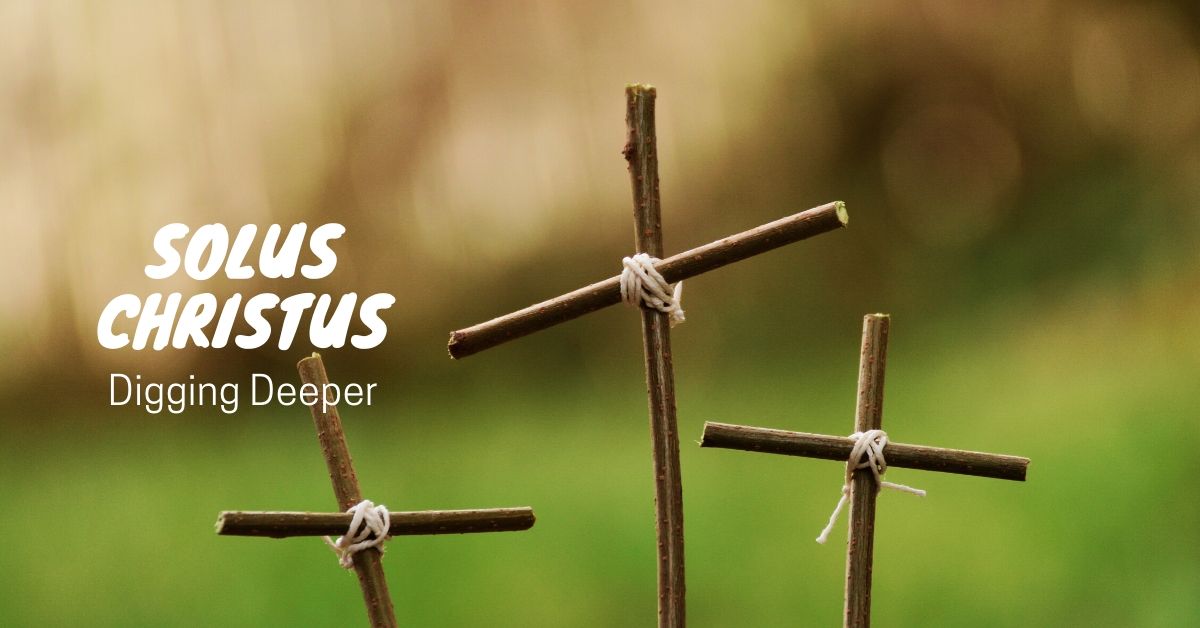 Today is 2-for-1 Friday!
Check out Solus Christus!

1) Who was/is the High Priest?

2) What does it mean that Jesus was tempted in every way? (verse 15)

15 For we do not have a high priest who is unable to sympathize with our weaknesses, but one who has been tempted in every way as we are, yet without sin. 16 Therefore, let us approach the throne of grace with boldness, so that we may receive mercy and find grace to help us in time of need.

5 For every high priest taken from among men is appointed in matters pertaining to God for the people, to offer both gifts and sacrifices for sins. 2 He is able to deal gently with those who are ignorant and are going astray, since he is also clothed with weakness. 3 Because of this, he must make an offering for his own sins as well as for the people. 4 No one takes this honor on himself; instead, a person is called by God, just as Aaron was. 5 In the same way, Christ did not exalt himself to become a high priest, but God who said to him,

You are my Son;

today I have become your Father,

6 also says in another place,

You are a priest forever

according to the order of Melchizedek.

7 During his earthly life, he offered prayers and appeals with loud cries and tears to the one who was able to save him from death, and he was heard because of his reverence. 8 Although he was the Son, he learned obedience from what he suffered. 9 After he was perfected, he became the source of eternal salvation for all who obey him, 10 and he was declared by God a high priest according to the order of Melchizedek.

1) Who was/ is the High Priest?
Throughout these verses a High Priest is referenced frequently. First, we must understand the role of high priest in the Jewish context. This position was appointed by God, the first being Aaron (brother of Moses), and all the rest coming from his family line (formally called Levites). Exodus 28 contains God’s appointment of Aaron. One of the responsibilities of the high priest was to offer a sacrifice on behalf of the Israelite nation for the forgiveness of their sins. (Leviticus 9:7) This sacrifice only covered the sins of God’s people temporarily. As Israel settled in the Promised Land and built the temple this sacrifice continued in a room known as the Holy of Holies and the high priest entered once a year to offer the sacrifice of an innocent animal. However, God knew the sacrifice of an animal was temporary and could never pay the cost of sin. From the beginning God knew the price of sin would need to be paid once and for all. Jesus was the answer and His sacrifice forever paid the penalty that no animal and no person ever could. He became our High Priest through the sacrifice of His perfect life for the debt of our sin.

2) What does it mean that Jesus was tempted in every way? (verse 15)
In referring to Jesus, Expositor’s Bible Commentary states, “He was tempted to sin, but withstood the temptation. He had true and complete humanity, and human nature, as such and alone, is capable of sin.” Matthew 4:1-11 records Jesus being tempted by Satan. Expositor’s says, regarding Jesus’ temptation, “He felt the power of the temptation, which appealed in every case, not to a sinful lust, but to a sinless want and natural desire.” The audience of Hebrews would have understood this and known Jesus didn’t give into the temptation. He was tempted as every human, but remained perfect as only God could.

3) What does verse 16 mean?
Boldness, mercy, and grace are three words that jump off the page at me when I read that verse. The author of Hebrews is telling readers they can come with boldness in prayer. However, they are still coming to the God of the universe and should come to the throne with the reverence the King deserves. As a result, God is waiting to pour out His mercy and grace upon them.

1) Who was/ is the High Priest?
As believers today, we do not rely on the sacrifice of an imperfect, sinful human high priest to go before God on our behalf through the sacrifice of an innocent animal. Jesus has already paid the price in full. When He died on the cross, He tore the curtain separating the sinful people from the Holy of Holies. What a powerful sign that Christ’s work is finished. We now have a fully restored relationship with God because of Jesus’ sacrifice! Jesus came to be the final and ultimate High Priest. He took our place and sacrificed Himself on our behalf in an act only the perfect Son of God could wholly complete.

2) What does it mean that Jesus was tempted in every way? (verse 15)
Jesus faced temptation from Satan and, although He was fully man, He did not give in to the temptation. He remained perfect. You and I are not perfect. We have all sinned. (Romans 3:23) We can find hope when we are tempted to sin because Christ shows us we do not need to give into temptation. Our chains to sin are broken through Christ’s sacrifice! As believers, we are not guaranteed to never face temptation, however, we are guaranteed we will never face it alone. Jesus stands with us, and empathizes with us, because He knows the struggle. Jesus sets the example that when temptation comes we do not have to sin; we have the freedom to obey and follow Him through His Spirit dwelling within us!

3) What does verse 16 mean?
Regarding mercy and grace Matthew Henry writes, “mercy to pardon all our sins and grace to purify our souls”. God was merciful in pouring out what we did not deserve through the blood of Jesus. It is His grace that cleanses us and restores the broken relationship sin left behind. Therefore, we can, with confidence approach the throne of God with boldness because of the sacrifice of Jesus. We do not have to approach afraid to ask. We have a loving Father who desires us to come to Him with all of our needs. God desires us to come not only when life is going well, but also in the hard times when our needs are big. All we must do is come to Him!

What do YOU think?! Share Here!
Missing the connection to our other Journey Study today?
Catch up with Solus Christus!

This is Sola Week Two!
Don’t miss out on the discussion!
Sign up to receive every GT Journey Study!