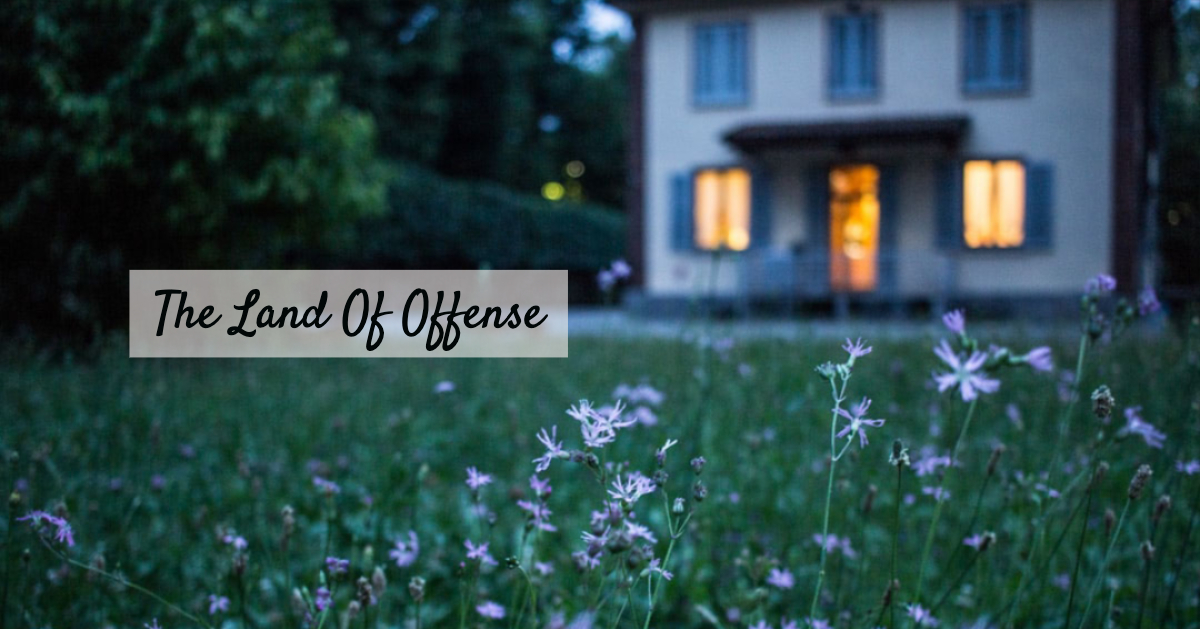 Are you familiar with the Land of Offense, friend?
Allow me to paint a picture….

The trees in the woods are dark; the forest shrouded in hurt. Every branch juts furiously into the air, each one a reminder of the unforgivable thing done to us. The sky is aflame with ugly orange and red streaks of anger, while the clouds are vicious and circular…not unlike the thought patterns which turn the offense over and over in our minds.

Flowers are unable to bloom for the infestation of irritation, and the borders of the Land of Offense are closed to visitors, because we refuse to allow anyone close enough to see our brokenness. The most interesting feature?
In many cases, the Land is virtually invisible to whomever we might consider “the offender.”

That’s right. This thing we’ve chosen to pick up and carry affects us and everyone around us…..while the person(s) we blame for our misery remain blissfully unaware.

It’s no mistake that when Jesus taught on anger, He instructed that if we are presenting our offering to Him and remember our brother is carrying an offense against us, we are to stop and leave at once to make amends with that person.

Isn’t His wording interesting there?
Rather than instructing us to go and make amends with the person we have offended, He specifically instructs us to first recognize if our brother has picked up an offense against us, and to make that right before we continue with our own offering.

Do you catch the nuances there?
It has little to do with whether or not we feel like we have done something wrong, and everything to do with accepting our responsibility to go to the person who is offended and restore that relationship.

Do you know who had every right to be offended?
Joseph.
He was betrayed by those who should have loved him best: his older brothers. Worse, they planned to kill him! At the last minute, they sold him into slavery, then convinced his father he’d been killed by a wild animal.

I wonder what we would have done in that situation.

If you or I had been on the receiving end of murderous intent, then trafficked by our own brothers, would we have resisted the temptation to harbor un-forgiveness and anger toward those who hurt us?
Would we have extended forgiveness?
Would we have offered praise to the Lord, even then?

I don’t know, Sister. I’d like to think so, but if I’m being honest, the truth is that I’ve picked up an offense over far (and I do mean far) less than Joseph’s offenses.

Yet, that’s exactly what Joseph did.
Rather than wallowing in self-pity, or fueling himself with anger and hatred for the rest of his days, he chose to view everything through Kingdom vision and rest in the knowledge that his God was in control.

The Lord blessed Joseph, not because of who Joseph was or what he did, but because the Lord is God, and He chose to be with Joseph. He made Joseph successful in every endeavor.

When the time came, and Joseph was given the opportunity to exact vengeance on his guilty brothers, the Lord moved his heart to act in forgiveness instead.
Because Joseph had chosen to trust God even when he had a right to be offended, he wasn’t hung up on what had happened all those years ago.
Because Joseph chose forgiveness rather than offense, the Lord was able to move through Joseph and extend hospitality to the very brothers who once longed to murder him. Through Joseph’s obedience and faith, his entire family was spared from the famine which ravaged the land. They, and everyone in their households, including their livestock, were well cared for and had all they needed.

Sister, what would this place look like if each one of us committed to forgiveness and obedience, in our even when?

Would we begin to see the Lord move powerfully in our families and schools and churches and cities because we would be unwilling to choose citizenship in the Land of Offense?

Would He begin to fill us with a fresh spirit of hospitality,
because there would be so much room to fill in a life lived free from offense?

Would we begin to see a move of God that doesn’t make sense to the world, because rather than handing out condemnation, we would allow Holy Spirit to do His work while we do ours by inviting the broken into our homes, our lives, and our church pews?

Father, You are just and holy.
Forgive me for the times I have been quick to pick up an offense against others.
Show me what a life lived free from offense looks like, so I can be Your vessel, capable of extending hospitality from a heart that is open and ready to give.
I want to be a good ambassador of your Name.
Shape me to look like You!
Amen.

Thanks for joining us today as we journeyed into Open Week Three! Don’t miss out on the discussion below – we’d love to hear your thoughts!
Click the above image for today’s Digging Deeper!