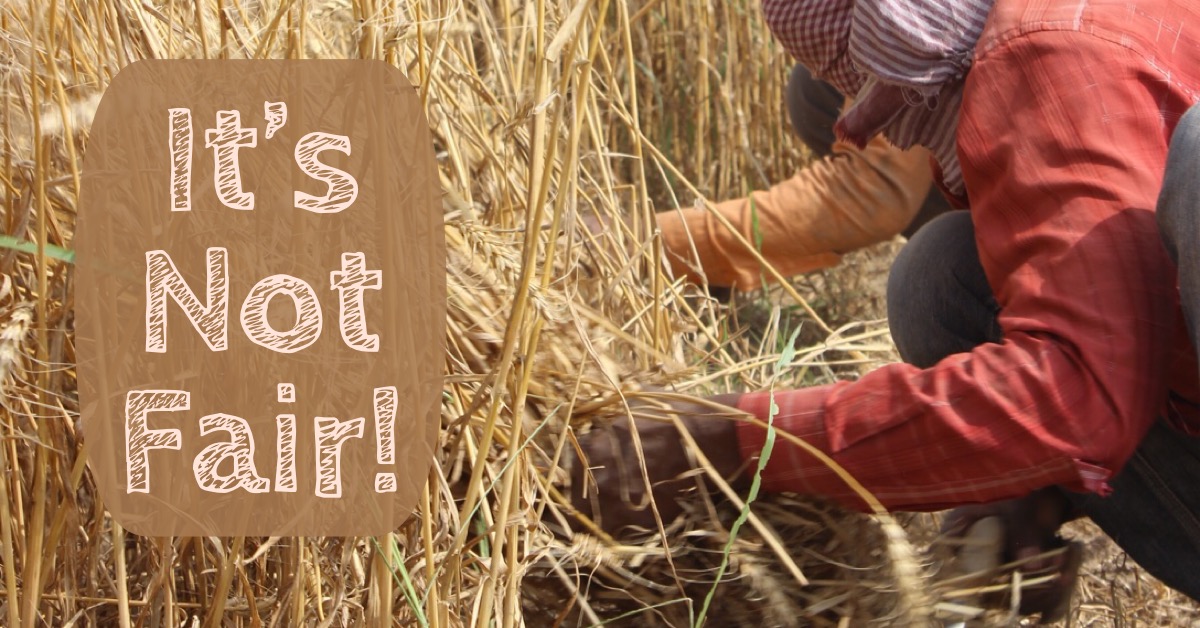 “It’s Not Fair!”
Anyone who has been around children for any length of time is probably very familiar with that phrase.  There is little more that is absolutely certain to frustrate a child than perceived injustice, whether it’s because someone else receives a slice of cake slightly bigger than theirs, or gets to spend a few minutes longer on a favourite activity, or simply because they have the sense that someone else is being favoured.

As we grow up, we probably become less concerned about such meticulous fairness in small matters, but the sense of justice, and the desire to see people treated fairly, remain.

In the parable we are studying today, that sense of justice certainly kicks in for the workers who were hired early in the day to tend the vineyards.
How can it be right that after toiling and labouring all day, others who had worked for only one hour, received the same reward?!

It’s just not fair!
I can sympathise with the workers’ indignation.
Maybe you can too.

So, what are we to make of this parable?  What is Jesus teaching us about the Kingdom of Heaven? Is God really being likened to an unfair landowner?

The first thing to note is that, far from being unfair, the landowner actually pays the first workers exactly what he promised.  They agree to work for one denarius (the typical daily wage) and that is what they receive.  When the subsequent workers are hired, the landowner mentions no specific wage, but promises to pay “whatever is right.” (Matthew 20:4)

The issue is not the landowner’s injustice to the first workers,
but his radical generosity to those who were hired later!

“Didn’t you agree with me on a denarius?  Take what’s yours and go.  I want to give this last man the same as I gave you. Don’t I have the right to do what I want with what is mine? Are you jealous because I’m generous?’”  (Matthew 20:13-15)

To understand what this parable is truly all about, it’s helpful to look at the context.
In Matthew 19, we meet a rich man who comes to Jesus seeking eternal life, but turns away after being told to sell all his possessions.

Jesus’ disciples witness this interaction, and Peter’s response is to point out the contrast between the rich man, who is unwilling to surrender his possessions, and the disciples, who have given up their whole way of life to follow Jesus: “See, we have left everything and followed you. So, what will there be for us?”  (Matthew 19:27)

Jesus assures Peter that anyone who has given up anything for His sake will receive far, far more in return, but He also points out that “many who are first will be last, and the last first,” (Matthew 19:30). He then tells the parable of the vineyard workers.

As He often does, Jesus turns the world’s way of thinking on its head.
Worldly wisdom teaches that we should be rewarded according to our actions.
Those who, like Peter and the other disciples, have worked hard for the Kingdom, deserve a greater reward, but Jesus teaches that it’s all about grace.

“For you are saved by grace through faith, and this is not from yourselves;
it is God’s gift – not from works, so that no one can boast.”  (Ephesians 2:8-9)

That sort of radical generosity can be hard to take.
It’s often more comfortable to feel we have worked hard to earn something than it is to accept a free gift.

It can be even harder when we see that grace extended to others,
who seem to us,
less deserving.

We see it in Jesus’ parable of the Prodigal Son as the wayward brother is welcomed home instead of being treated as an outcast; his hard-working brother becomes infuriated.
Again, this jealous arrogance rears its head in the reaction of Jonah to the people of Nineveh being spared. Jonah wanted grace aplenty for himself, but none for others he deemed un-worthy.

It’s easy to fall into owning a similar attitude,
thinking we deserve more because we have worked hard for God,
or tried to live a good life.
It’s the feeling that, somehow, God owes us something for our devotion to Him.
It can feel unfair.

But do we really want fair?
Fair is being left “dead in our trespasses.”  (Ephesians 2:1)
Fair is remaining “children under wrath.”  (Ephesians 2:3)
If we want the payment our deeds deserve: this is fair!

I’m grateful salvation doesn’t depend on God treating us fairly,
but on His radical grace and generosity in sending Jesus to die for us.

“But God, who is rich in mercy, because of His great love that He had for us, made us alive with Christ even though we were dead in trespasses. You are saved by grace!”  (Ephesians 2:4-5)

Grace levels the playing field.
We all stand before God as equals, sinners.
He invites all to be saved, undeservingly, by grace.
He deeply loves each of us, and calls into His work.
Not in order to earn His favour or gain a reward,
but out of gratitude for the amazing grace He extends to all!

Thanks for joining us today as we journeyed into Screenshot Week Two! Don’t miss out on the discussion below – we’d love to hear your thoughts!