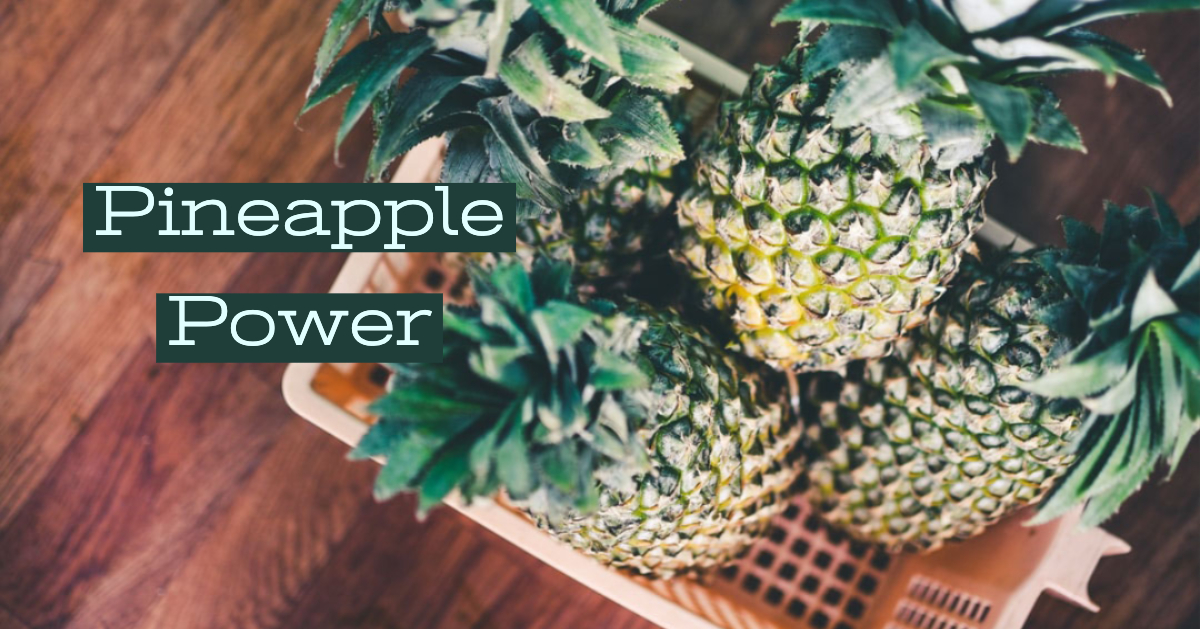 “Did you know pineapple is the symbol for hospitality?” Someone asked my friend this over the weekend. While I found myself nodding because I did actually know that random fact, it was not until I googled the why behind it I began to realize the timeliness of that question.

Based on the articles I read (just google: pineapple hospitality), the pineapple originally became a symbol of hospitality in the 1600s in Europe. Pineapples had to be shipped from tropical locations, and this, in turn, required significant investment by those purchasing them. They became a marker of the wealth and status of that home. If someone attended a party with a pineapple present or served, they knew their host had spared no expense for their guests and the overall experience. Articles stated that people even rented pineapples for their parties to have on display in order to achieve this goal.

As time passed and methods for growing pineapples in other climates became functional, the pineapple transitioned to a true symbol of hospitality accessible to more than the elite. The 19th century marked the shift as pineapples became a literal centerpiece to Christmas celebrations.

By now you may be wondering why the pineapple question is timely or even how it is relevant to a story in the Old Testament. No, you have not randomly missed a pineapple reference in the Word; however, hospitality is truly something evidenced throughout Scripture. In fact, one such story demonstrates hospitality being shown with great cost and great obedience.
A biblical pineapple, if you will. Turn with me to 1 Kings 17.

Here we find the prophet Elijah, hiding by a brook after declaring to King Ahab that a severe drought had been appointed by the Lord. The Lord had told him to go to there while also commanding ravens to bring him bread and meat.
Can you imagine that?!
Ravens, literally the birds of the air, were feeding Elijah!

Elijah had obeyed in informing King Ahab of the impending lack of water, then followed the leading of the Lord to hide. In the midst of all of that, the Lord provided his needs by commanding the birds of air. Elijah stayed at this “air bnb” site ordained by the Lord until the brook dried up. At that point, Elijah heard the Lord direct him to the next point of hospitality, our pineapple centerpiece.

Enter the widow of Zaraphath.
Have you read verses 8-16? Go ahead and read those if you haven’t yet, (just click the link!) and come join us back here.

Now, put yourself in the shoes of each character for a moment.
What might it have been like to be either of these people in this interaction?
Could you have spoken with the boldness of faith of Elijah?
Could you have served with the same sacrificial humility of the widow?

I find myself wrestling with both of these questions.
Could I?
Would I?

But as I ponder the Word, the more I see the steely resolve undergirding both individuals.
You know what that resolve is?

A continual “yes” to trusting that what the Lord has spoken will come to pass.
What He has promised will be fulfilled.
His very character and heart are to be trusted.

Elijah is walking into this conversation with some history that cannot be denied.
Remember that word given to King Ahab just a few verses earlier?
If I were Elijah, I would have planted myself by the water, watching it flow vivaciously, and begun to second guess if I’d heard the Lord correctly.
Who knows how long I would have sat there before I began realizing it hadn’t rained in some time or, on waking in the morning my clothes were not damp with dew. Even then I may have rationalized it was just not raining in my area.
But then the brook began to dry up, the water level quickly decreasing.
The water flow no longer lulled me to sleep.
My source of water began to disappear, which could only be caused by a lack of water upstream. My faith may have started out small, but unlike the brook, my faith level continued to rise.
The Lord was faithful to His Word.

It is with this prolonged confirmation Elijah left the now dry river bed and sought out the widow. He solidly knew that just as the Lord commanded ravens to feed him, so the Lord had commanded the widow to care for him.

Now, I don’t know what the widow’s exchange with the Lord included, but at some juncture she heard the Lord direct her to care for Elijah. Her faith astounds me as well.

The woman is literally collecting sticks to create a fire on which she will cook the last of the dough in the house when she is asked for a bite to eat.
How much did logic wage war with faith in her heart?

Was this her pineapple of hospitality?
Counting the cost of speeding up the starvation process in order to serve a perfect stranger?

As the Lord repeatedly demonstrates throughout Scripture, He delighted in multiplying what was needed.

Both Elijah and the widow received the reward of their faith and were sustained throughout the drought. The Lord ordained Elijah to be the mouthpiece declaring both the beginning and end of the drought.

What would have happened if the widow had declined her role in this story?

Hospitality may not always be convenient or comfortable, but, my dear sister, I pray that when you sense the nudge of the Lord to open your arms, your table, and your heart,
you count the cost and obey with all you’ve got.
The Lord rewards such faith, and that is sweeter than any pineapple!

Thanks for joining us today as we journeyed into Open Week One! Don’t miss out on the discussion below – we’d love to hear your thoughts!