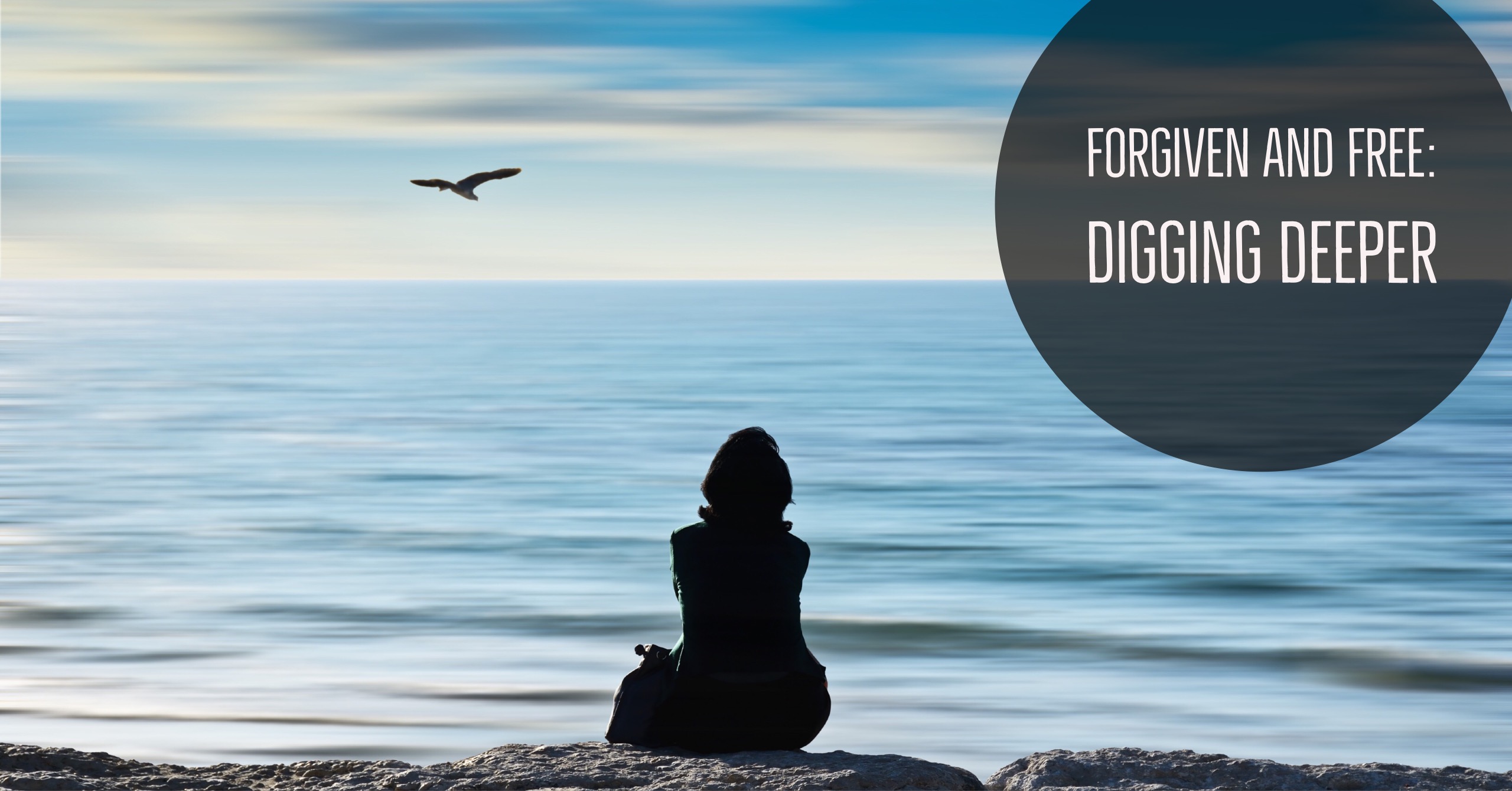 How joyful is the one whose transgression is forgiven, whose sin is covered! 2 How joyful is a person whom the Lord does not charge with iniquity and in whose spirit is no deceit!

3 When I kept silent, my bones became brittle from my groaning all day long. 4 For day and night your hand was heavy on me; my strength was drained  as in the summer’s heat.        Selah 5 Then I acknowledged my sin to you and did not conceal my iniquity. I said, “I will confess my transgressions to the Lord,” and you forgave the guilt of my sin.        Selah

1) How is sin covered and how do we become the kind of person the Lord will not charge any iniquity against?

2) Why did the psalmist’s “bones become brittle” and his strength “drained”?

3) How is confession tied to forgiveness? Can we be forgiven without confession?

1) How is sin covered and how do we become the kind of person the Lord will not charge any iniquity against?
Sin is defined as anything that goes against God’s holy character. We often point to the Ten Commandments as being the litmus test for whether we have sinned, but this is only a small sampling; albeit none of us can pass even this short list of 10! Arrogance, lust, bitterness, hatred, selfishness, all of these and many more fly in the face of a holy and righteous God. When we look at sin, and we look at God, from this vantage point, it is no wonder at all why the psalmist in Psalm 130:3 cries out, “Lord, if you kept an account of iniquities, Lord, who could stand?”. Sin separates us from God, with no hope of re-gaining His good pleasure over us without the forgiveness of sin. The only one who can forgive a sin is the one against whom a sin was committed. Because God is righteous and just (He wouldn’t be holy if He wasn’t also just, would He?), He cannot simply “excuse” or “look away” from sin, there must be a price that is paid. The only dollar amount large enough to cover sin is absolute perfection. The only One who could possibly offer absolute perfection is the Only Being who is fully righteous: God Himself. And so God chose. He chose to pay the penalty of sin Himself, through the person of Jesus Christ (who Himself is fully God).  Sin is forgiven through Jesus Christ’s sacrificial payment on our behalf. His perfection, offered for us, is the satisfaction of a debt we could never pay.

2) Why did the psalmist’s “bones become brittle” and his strength “drained”?
Verses 3 and 4 provide two reasons as to why the psalmist was experiencing these physical ailments. “When I kept silent” and “Day and night your hand was heavy upon me.” These two verses paint “negative” feelings in contrast to the “positive” feelings from verses 1 and 2. Forgiveness brought delight, joy, and fullness, but when David (the author) held onto his sin, when he was “silent” and not confessing his sin, guilt weighed him down. He was not just heavy-hearted emotionally and spiritually, his body also experienced a heaviness. It was a brokenness, a sapping of strength. His sin created a need for forgiveness, and his guilt was amplifying that need.

3) How is confession tied to forgiveness? Can we be forgiven without confession?
Verse 5 begins with the words “Then I acknowledged my sin to you”. You can almost feel the weight being lifted from David as he pens these words. Freedom from forgiveness had embraced him! But note that forgiveness wasn’t given until acknowledgement and confession came first. ““I will confess my transgressions to the Lord,” and you forgave the guilt of my sin.” (verse 5). The “and” here could also be translated “then”. First, I acknowledged and confessed, and then God forgave. The Lord’s forgiveness is always available, He will never need to “decide” whether He will forgive you or not, but that truth does not negate that we must each acknowledge and confess prior to experiencing that forgiveness. Without recognizing that, “oh my, when I snapped in anger, that was sin; it was sin against a holy God”, asking forgiveness is simply words passing through our lips completely disconnected from our hearts. Then we take that understanding of sin and stand before God, confessing that we agree with Him about our sin. We express our genuine desire to be restored, we want to turn away from our sin that we might once again live in the freedom of forgiveness. This is when forgiveness happens!

1) How is sin covered and how do we become the kind of person the Lord will not charge any iniquity against?
Logically, the only person who could never be charged with iniquity is a blameless one, so how do sinful people not be charged with iniquity? Herein lies the absolute beauty of the gospel! The person whose sin is covered, the one whose sin has been paid for, these are the men and women against whom the Lord will not hold their sins against them. With sin’s effects so detrimentally damaging, there is simply no way we could ever “become” blameless on our own accord. Later in verse 5, the psalmist points to forgiveness coming from the Lord. This is the only way to be a person who no longer is indebted to the consequences of sin. Just because Jesus chose to offer Himself as the payment price doesn’t mean we are covered. We must choose Him also. Is Christ’s sacrifice yours? Is His righteousness your covering? If you’ve already crossed the initial line of faith, are you living in forgiveness in this moment? The need for forgiveness of sin, both the sins we commit and the sins committed against us, abounds everywhere. Take the gospel right into the middle of your everyday.

2) Why did the psalmist’s “bones become brittle” and his strength “drained”?
We tend to think of guilt as being negative. While it’s certainly not a feeling we desire to have, that gnawing in our stomach and physical heaviness of a wrong we have committed is a gift from God. When we have surrendered to Christ, He makes us His own and gives us a new identity, one that is no longer tied to sin, but is alive and free with the new life that comes from being forgiven. Because we are His, He has promised to teach us to walk in that newness of life through the power of the Holy Spirit. When we sense guilt, the Holy Spirit is convicting us to return to Him, to see our sin for the vile thing that is and run back into the freedom of forgiveness! Don’t ignore your godly guilt, which always brings freedom from sin!

3) How is confession tied to forgiveness? Can we be forgiven without confession?
Authenticity in our hearts is what the Lord looks at, long before examining our actions. In Psalm 66:18 David writes, “If I had been aware of malice (sin) in my heart, the Lord would not have listened.” Where have you been making light of sin, perhaps not taking it as seriously as the Lord does? It’s an easy thing for us to justify and excuse when it is our own sin. “It’s not that big of an issue.” “I only do it when I’m desperate.” “It’s not like I do what she does.” The problem with all of these justifications is they are the result of comparing ourselves to something less than the standard of holy perfection. When it comes to sin, the only correct comparison is the righteous God, not our neighbor, not our spouse, not how we would have reacted 4 years ago, only the Lord! Just as quickly as we recognize the weightiness of our sin, God invites us into freedom. We were never meant to live under guilt, we were made to dance free in forgiveness! So, hold that sin of yours, look at it with all the lights on, then confess to the Savior your longing to be made whole and free. Then join with the psalmist as he victoriously declares, “How joyful is the one whose transgression is forgiven, whose sin is covered!” (Psalm 32:1)

Share your thoughts from today’s Journey Study!
Can we pray for you?
Sign up to receive every Journey Study!
Join the friends at the GT Facebook Community!

Thanks for joining us today as we journeyed into
Character Week Three!
Don’t miss out on the discussion.
We’d love to hear your thoughts!

Looking for other journeys from this theme?
See all past studies in Character!