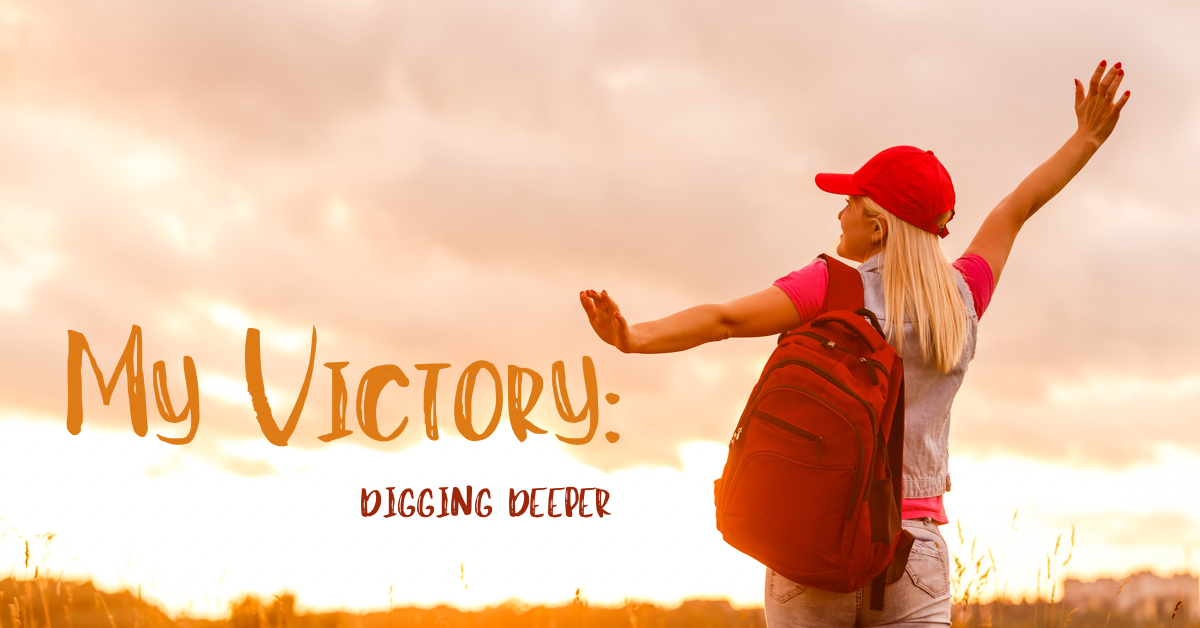 Yesterday’s Journey Study connects with today’s!
Check out My Victory!

2) Why is it important for power to come from God and not us? (verse 7)

3) How can we remain positive, like Paul in verses 8-9, when everything around us seems to go wrong?

7  Now we have this treasure in clay jars, so that this extraordinary power may be from God and not from us. 8  We are afflicted in every way but not crushed; we are perplexed but not in despair; 9  we are persecuted but not abandoned; we are struck down but not destroyed.

1) What is meant by the words ‘treasure in clay jars’? (verse 7)
“Treasure”; it’s such a beautiful word and found quite often in the Bible. In some instances it refers to riches (Ezra 6:1, King James Version), a storehouse (2 Chronicles 5:1, King James Version), or hidden treasures (Deuteronomy 33:19). In the New Testament, it is often found in relation to the Kingdom of Heaven. I specifically think of the parable of the Hidden Treasure (Matthew 13:44), where Jesus talks about the Kingdom of Heaven as being a treasure that was buried in a field. A man found it, sold everything he owned, and bought the field. In our verse for today, the treasure refers to the gospel. It’s the good news that, though we are sinners separated from God, Jesus as God the Son, became like us in human flesh to take our punishment of death and separation on Himself, sparring all who surrender in trust to Him. The truth of the gospel is a treasure so great, it’s difficult for us to understand its true value. The treasure Paul speaks about, is said to be carried around in “clay jars.” These earthen vessels were used in ancient culture to be filled up with items and carried about, but the clay is fragile. If it falls, it could easily break. This symbolism refers to our own weak bodies on the outside, but in our hearts, we carry the treasure of the gospel to share with others around us.

2) Why is it important for power to come from God and not us? (verse 7)
This question has two short answers, simple to understand, but more difficult to surrender to and live out. First, because we are sinful, finite human beings who truly have no power at all, and certainly no ability to save ourselves from our eternal punishment of sin and death, we are immediately disqualified from giving power to ourselves. The power we have comes from God as He is the only One who holds ultimate authority. It is He who declares us, sinful though we are, as righteous when we give ourselves fully to Him. It is He who has the power to forgive us, the power to free us from sin, the power to make us more like Himself, and the power to safeguard our souls for all eternity. There is none like Him! Paul states in 2 Corinthians 12:10, “For when I am weak, then I am strong”, meaning that God will make him strong through the platform of his own weakness. Power doesn’t come from us, but from our Father in Heaven. (2 Timothy 1:7) Secondly, the power comes from God because, even if we could use our own power, we would have reason to boast in our ability, stealing the rightful glory from God alone. (Ephesians 2:9) Instead, we should join Paul by saying, “If boasting is necessary, I will boast about my weaknesses” (2 Corinthians 11:30), and “boast in the Lord.” (1 Corinthians 1:31)

3) How can we remain positive, like Paul in verses 8-9, when everything around us seems to go wrong?
Paul makes it clear in his many letters that his strength came from the Lord alone. Daily, he gave himself to Jesus and died to himself and his self-focused desires. (1 Corinthians 15:31) He tells us to do the same as we commit to following Jesus, “So, you too consider yourselves dead to sin and alive to God in Christ Jesus.” (Romans 6:11) Paul surrendered to Jesus with everything he had and he held onto the hope of eternal life offered only through Christ. He trusted Jesus with his whole life and lived out his surrender with his everyday decisions. He knew with confidence that, one day, he would be with the King of kings. Nothing else mattered in light of that reality. This truth motivated Paul to keep moving forward until the day he gave his physical life for Christ in death.

1) What is meant by the words ‘treasure in clay jars’? (verse 7)
We live in a world where we’re busy running here and there. Often, even Christians are too busy to open their Bible, read it, study it, and ask the Lord to show us how to apply its truth to our lives. Even if it’s just for 5 minutes a day! Yet, this single discipline is so important for us to dedicate time, attention, and priority. The Word of God holds an indescribable worth of treasure. We need to soak ourselves in His Word. We need to pray and grow closer to Jesus, no matter how busy we are. When we have a close relationship with our Saviour, we become increasingly aware of the wonderful treasure we carry inside our fragile human bodies, and we long to share this beautiful gift with the world! God gives us the mission to go out and spread the treasure of the gospel. (Matthew 28:20) He doesn’t give this important calling to His angels, but to us, mortal sinners who are utterly hopeless without Christ. Our only hope for eternal life and salvation is found through the precious blood of Jesus Christ. (1 Peter 1:18-19) Together, let’s be a worthy vessel for God and share His “treasure in clay jars”. Let’s start today!

2) Why is it important for power to come from God and not us? (verse 7)
When we go out into the world, whether it’s in our neighbourhood or on mission across the globe, we should always remember the reality that, without the Spirit of God, we are incapable of doing anything that will last into eternity. Jesus described Himself as the vine where we are the branches. He is the Source of everything, and we are invited into Him to accomplish His work in the world through Him. As long as we abide in Him, and He in us, we will bring forth much fruit for His kingdom. (John 15:5) In other words, the gospel will go out in power because of Christ’s Spirit at work in and through us. Jesus continues, if we refuse to abide in Him, we will be rendered useless in His kingdom. (John 15:5) The power doesn’t come from us, but we must make the important decision of walking in surrender to Christ. If we want to share the treasure of the gospel with others, it’s vitally important we remain close to Jesus through prayer, studying Scripture, and living in biblical community as we daily surrender our will to His.

3) How can we remain positive, like Paul in verses 8-9, when everything around us seems to go wrong?
Jesus warned us we would have hardship and troubles in our lives. He told us to follow Him and carry our cross, putting to death our self-serving desires in order to live fully surrendered to Christ. (Matthew 16:24) He didn’t say these things to frighten us. No, the opposite is true. He wanted us to know that life would be challenging as we committed to following and surrendering to Jesus, more challenging than we could imagine. In light of this, He told us to not fear over and over again. (Matthew 8:26; Matthew 14:27; Mark 5:36; Luke 12:7) The list of passages where God commands those who trust Him to leave behind all fear fills the pages of Scripture from Genesis to Revelation. Even in the Old Testament, we hear the Lord say, “Do not fear, for I am with you; do not be afraid, for I am your God. I will strengthen you; I will help you; I will hold on to you with My righteous right hand.” (Isaiah 41:10) Just like Paul, we are called to leave fear behind us, instead fixing our eyes of faith on Jesus and the promise that He will always be with us, even for the rest of eternity! (Matthew 28:20) Let’s keep in the forefront of our mind, that all troubles aren’t even worth comparing the greatness of that One Day when we will dwell with God in His fullness forever. He will wipe all tears from our eyes and keep us in His perfect, joyous peace. (Revelation 7:17)

What do YOU think?! Share Here!
Missing the connection to our other Journey Study?
Catch up with My Victory!

This is Worship VIII Week Three!
Don’t miss out on the discussion!
Sign up to receive every GT Journey Study!