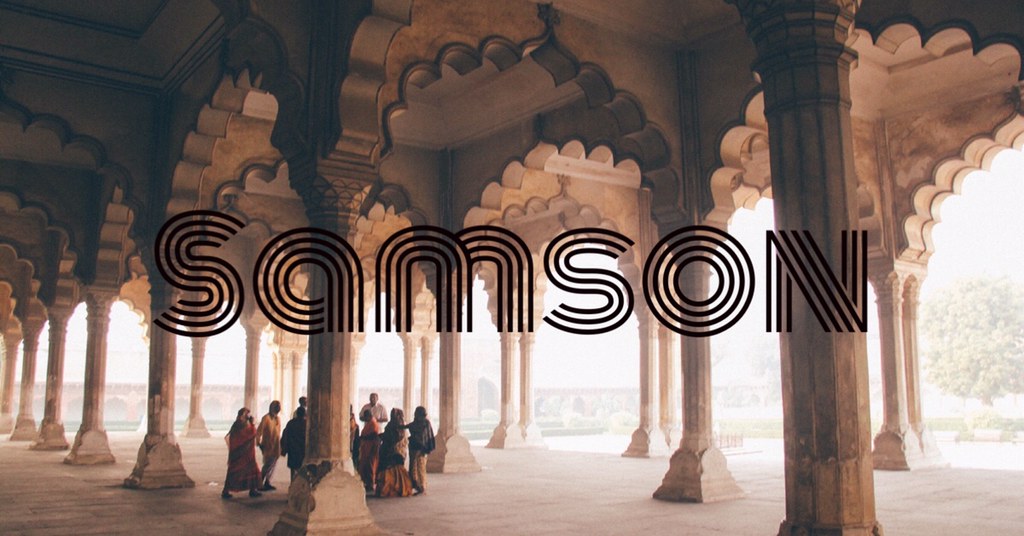 As I am led out into the temple, the noise of the crowd is overwhelming. It sounds like there are thousands of them there, mocking and jeering as I approach.

Though I am unable to see, as my eyes were gouged out by my enemy’s jealous, fearful hands, my ears work perfectly. Their drunken shouts assault my senses, and I can easily imagine their scornful faces.
To them I am a joke, an object of ridicule.

As they praise their god for giving them victory over me, I rest my hands against the temple pillars, and I wonder:
How did it come to this?

I had such a promising start…
I was marked out even from before my birth as someone special, dedicated to God as a Nazirite. My name, Samson, means “like the sun,” and my future looked bright.

Of course, the Nazirite vow meant restrictions, but this was a high calling as judge and deliverer. I would be the one to finally begin freeing my people, the Israelites, from the Philistines, our relentless oppressors for 40 years.

Then there was the gift of my strength, which was beyond anything people had seen before.  When a lion attacked me, I was able to rip its jaws apart with my bare hands.  I fought off the Philistines barehanded on several occasions.  When they attempted to ambush me at Gaza, I simply picked up the city gates and carried them away.

I failed to keep my Nazirite vow by eating honey from a lion’s carcass, rendering myself unclean.  My pride and stubbornness over a foolish riddle led to the deaths of several people, including my new wife.  At times my anger was out of control; a fiery rage ready to devour anyone or anything that crossed my path.

On top of that, I couldn’t resist a beautiful woman, no matter how unsuitable she was or how many vows I broke in the process. The Philistine woman I insisted on marrying despite my parents’ protests, the prostitute I spent the night with…

…And then there was Delilah.
Beautiful, charming, intoxicating, and highly dangerous.

I should have realised the truth about her when she was so insistent on discovering the secret of my strength, but again, as was my habit, I gave in to my weakness. My self-reliance.

Three times I lied to her about how I could be defeated.  Tying me up with seven new bowstrings would do it, or using new ropes, or weaving my hair into the fabric on her weaving loom and tightening the shuttle. She wanted my secret, no, she wanted my allegiance, but I had vowed it to Yahweh. I flirted with telling her, but I always felt I could stop when I wanted to.

Three times Delilah betrayed me, trapping me and then calling the Philistines to attack, but it didn’t matter. I had the strength to fight them off. Something in me still protected my Nazarite vow.

Delilah was determined.  I’m not sure why I finally told her the truth.  She said that if I really loved her I would share my secret, and eventually her constant nagging wore me down.  I think by this point I believed I was invincible, that my strength would always be enough, but that was the beginning of the end.
My weakness…
it never left, eventually it overtook me and I gave in, only to lose everything.

I confided in Delilah that if my hair were ever cut, I would become as weak as any other man. Before long, my head was shaved as I slept in her lap; the pounding of the Philistines’ awakened me.
Arrogantly, I believed I could free myself just as I always had,
but this time my strength had gone.

The Philistines chained me up, gouged out my eyes, and forced me to work as a slave, grinding grain.  It was a great triumph for them: victory over the mighty Israelite hero.

But as I stand here, blinded,
for the first time I truly see.

My strength was never my own.
It came from God.

How foolish I was to think my victories were due to my own merit.  I remember my words to God after one of the battles against the Philistines and I cringe:
“You have accomplished this great victory through your servant.”  (Judges 15:18)

How arrogant!
As if He needed me!

Yet, despite it all, He was gracious, continuing to give me strength and empowering me to defeat the Philistines again and again.

At last I see the truth: I am weak; He is strong.
My only power comes from Him.
True strength is found in submission to His ways.

Could it be that God can still fulfil His purpose even in our weaknesses and failures?  Could He use me to defeat the Philistines even now, in this weakened state?

With a prayer for strength, I push against the pillars,
and as I feel them move I know that God has answered.

Arms outstretched, I stand, as the rubble begins to fall, and the temple comes crashing in. I knew death was waiting for me, along with the countless deaths of my enemies drinking to their false god.
But I would die knowing truth: it was my weakness Yahweh wanted most. My weakness as I depended on Him alone!

You can read Samson’s full story in Judges 13-16.  Although he had many faults, he is included in Hebrews 11:32 in a list of examples of people who had faith and were used by God.  His story is a proof that God can work through us, even with our weaknesses and failures, but it also challenges us to remember the futility of self-reliance while holding tight to the importance of trusting in God rather than ourselves.

Thanks for joining us today as we journeyed into Sketched IV Week One! Don’t miss out on the discussion below – we’d love to hear your thoughts!

Looking for other journeys from this theme?
Here’s a link to all past studies in Sketched IV!