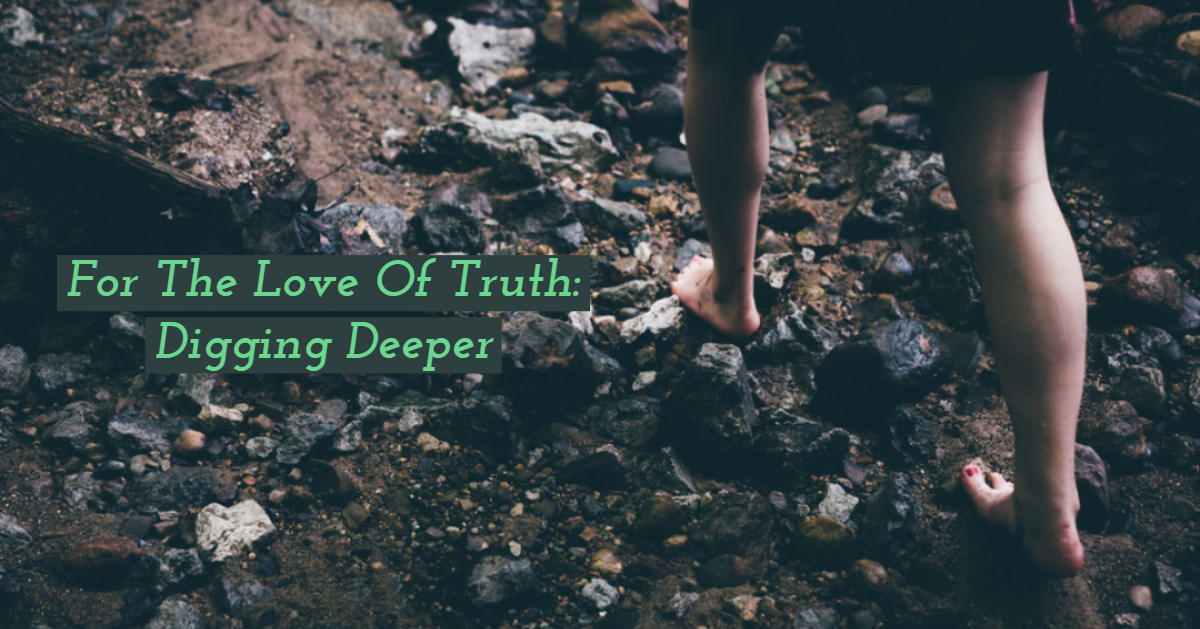 Yesterday’s Journey Study connects with today’s!
Check out For The Love Of Truth!

1) Who is Jesus addressing in this passage and why does He call them out?

2) What does it mean to practice sin?

31 So Jesus said to the Jews who had believed him, “If you abide in my word, you are truly my disciples, 32 and you will know the truth, and the truth will set you free.” 33 They answered him, “We are offspring of Abraham and have never been enslaved to anyone. How is it that you say, ‘You will become free’?”

34 Jesus answered them, “Truly, truly, I say to you, everyone who practices sin is a slave to sin. 35 The slave does not remain in the house forever; the son remains forever. 36 So if the Son sets you free, you will be free indeed. 37 I know that you are offspring of Abraham; yet you seek to kill me because my word finds no place in you. 38 I speak of what I have seen with my Father, and you do what you have heard from your father.”

1) Who is Jesus addressing in this passage and why does He call them out?
Here we find Jesus teaching in the Temple during the Feast of Tabernacles. There were many Jews in the city to celebrate, and they were crowded in to hear Jesus speak. Among the crowd were the Pharisees, a group of religious leaders, who already had tried to arrest Jesus for blasphemy. The Pharisees held a lot of power in Jerusalem: the Pharisees, although primarily a religious party, were highly involved politically because of how tightly religion was tied to government. (International Standard Bible Encyclopedia, from www.studylight.org)
While Pharisees were Jewish, not every Jew was a Pharisee, far from it. These words were directed to all Jews, Pharisee or not, for a very specific reason. Jews tended to, wrongly, hinge their “favor with God” on their lineage and their performance. If they could trace their heritage back through the bloodline of Abraham, then they considered themselves “safe” for eternity and having “favor with God”. The truth Jesus spoke here is for all hearers, but He specifically calls out Jews because they did not understand they were in desperate need of a Savior to rescue them from sin, just as much as their Gentile counterpart. Salvation has never been about works or performance, but always centered around radical, undeserved grace!

2) What does it mean to practice sin?
Webster’s Dictionary defines “practice” as a verb meaning: To do or perform frequently, customarily, or habitually; to make a practice of; as, to practice gaming. (www.studylight.org) So to practice sin means to sin on a fairly regular basis, whether that be daily, hourly, or twice a week.
Jesus describes His Jewish audience, who claimed Abraham as the reason they had favor before God, as those who practiced sin. He said this because without the freeing, resurrecting power of Jesus Christ, human beings have no other course of action except to keep on practicing sin. Jesus died to set us free from the power of sin and death and break the chains of “practicing sin”, but unless we take Him at His Word and realize our need for a Savior, we will just keep on sinning with no hope of ever being in right standing before God. Jesus loved the Jews and confronted His audience with these bold words, calling out their shaky beliefs, in order that they would repent and turn towards Christ for salvation.

3) What – or Who – is the truth?
Jesus begins His address to the Jews with an outstanding statement they would readily accept and agree with “and you will know the truth, and the truth will set you free.” (John 8:32) These Jews knew the Truth inside and out as they faithfully studied the Old Testament Scripture. Jesus started here because He knew the Jews would be tracking with Him, following and understanding where He was going.
What the Jews had missed in their study would cost them their eternity because they attributed their knowledge of truth to being what saved them because of their lineage.
But Jesus would take His audience further than they expected by bringing a brilliantly colored dimension to their reality by saying, “So if the Son sets you free, you will be free indeed!” (John 8:36) Jesus equated Himself to actually being truth!
Jesus began with “knowing the truth” relating to studying the Scriptures, but took it full circle, helping the Jews to see that without accepting Jesus as the fulfillment of Scripture and the embodiment of truth, they would still be slaves to sin.
Later, John recorded Jesus stating, “I am the way, and the truth, and the life. No one comes to the Father except through me.” (John 14:6) Jesus is The Truth and only in Him, could the Jews (and us!) find eternal life!

1) Who is Jesus addressing in this passage and why does He call them out?
Sometimes I find myself feeling a little bit like a Pharisee, trying hard to perform and keep “all the rules” in effort to “make God happy” with me. Maybe you do, too?Jesus made a specific point to call out the Jews for trusting in themselves for eternal security, but He calls us out at the same time. How do you view God’s perspective of you? Is He sometimes pleased with you? Does His love for you waiver back and forth depending on what you choose to do or not do? This line of thinking contains dangerous lies! We are neither saved from sin nor do we grow in righteousness through our own performance.
The entire process of our salvation and the journey from now until eternity is always, and has always been, about God’s rich grace lavished upon us.
As a reader of Scripture, the words of Jesus are amazingly relevant to each of us. No matter the original circumstance or people involved, His words transcend time and speak directly into our souls – that is, if we let them, dear ones. When we open the Bible, we must also open our hearts to recognize that the One who loves us the most is alive on every page. He instructs, chastens, comforts, and encourages when we allow ourselves to be teachable.
Listen in with the Jews of that first century and gladly set aside all our attempts to “earn God’s favor” on our lives, and simply welcome His un-ending, un-conditional love over us as believers who have confessed Christ as Lord with our lips and our hearts! (Romans 10:9)

2) What does it mean to practice sin?
In light of the dictionary definition, I must admit that I practice sin. Sometimes it’s mindless, almost automatic…other times it is quite planned and deliberate.  But does this mean that I am a slave to sin? No, not since I gave my life to Jesus!
Jesus is the chain breaker between me and sin’s rule over me. It no longer dictates what I must do (keep on sinning). As Jesus pointed out, every human being is a slave to one of two masters, either we are a slave to Sin or a slave to Christ. One rules with Death, one rules with life and love! The question is who is your Master (because you do have one).
So if I can see how I have a habit of “practicing sin” by choosing it over the life of love Jesus offers me, there is still hope because my eternal security is not anchored in my performance!
Sweet sister, the difference between us and the Pharisees is we have the Holy Spirit residing within our hearts, lovingly but firmly convicting us when we sin.
(Yes, when. Not if.) We have the opportunity to repent and ask for Jesus to forgive us.
Which He does. Each time. This is love!

3) What – or Who – is the truth?
The Jews were missing salvation because they mistook themselves as their own Savior. They trusted in everything but the actual Savior found in Jesus Christ. The trusted their knowledge, their studies, they performance, their good deeds, their self-proclaimed righteousness, and even their heritage to save them. All of which would fail them.
Sisters, it’s not hard for us to find ourselves in the same boat. Maybe we even trusted Jesus for salvation, but don’t trust Him to carry us onward in the journey of becoming more like Him. Do you beat yourself up over not being fill-in-the-blank? This is not from the Lord! His constant face towards you as His child is loving delight. If you’ve never truly crossed the line of faith, there is no hope for eternity or life here in the now outside of Jesus Christ and the righteousness He offers in exchange for our utter un-righteousness. Jesus held out grace-wrapped truth to the Jews that day because He loved them and He is doing the same for each of us, regardless of where we are on the faith journey!
Jesus is The Truth.
God is Love.
And Love rejoices with the Truth.
It all makes sense now, doesn’t it? God throws a proverbial party when Jesus triumphs!

What do YOU think?! Share Here!
Missing the connection to our other Journey Study?
Catch up with For The Love Of Truth!

This is Kaleidoscope Week Three!
Don’t miss out on the discussion!
Sign up to receive every GT Journey Study!