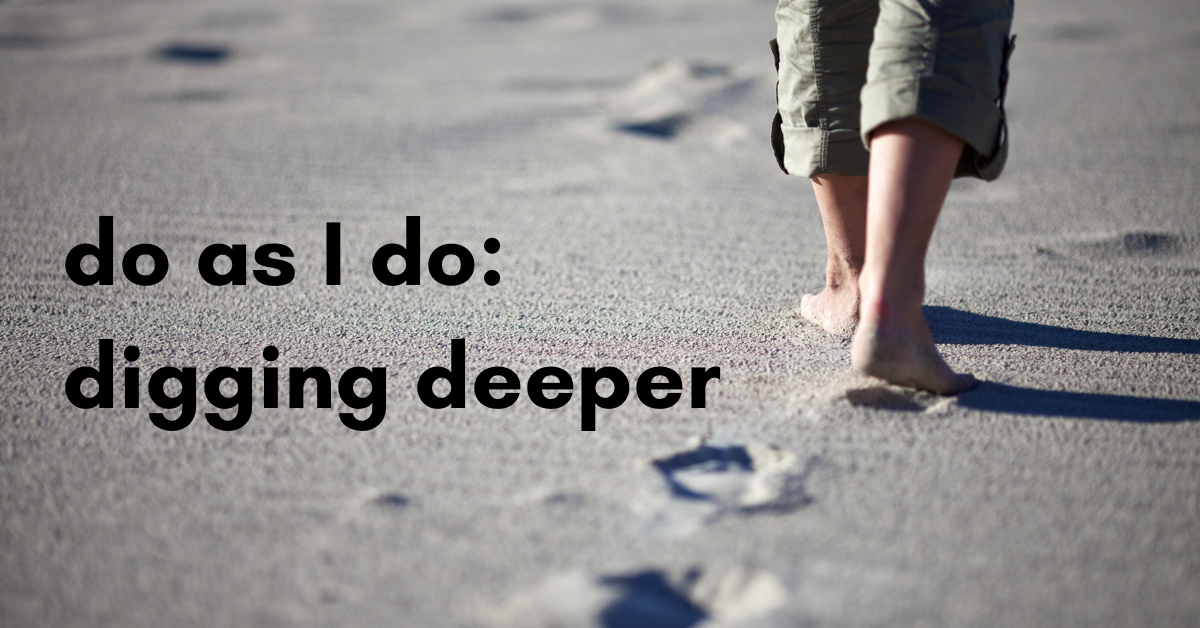 Yesterday’s Journey Study connects with today’s!
Check out Do As I Do!

1) Why did Jesus ask the disciples if they knew what He had done for them? (verse 12)

2) Why did Jesus command the disciples to wash one another’s feet? (verse 14)

When Jesus had washed their feet and put on his outer clothing, he reclined again and said to them, “Do you know what I have done for you?” You call me Teacher and Lord – and you are speaking rightly, since that is what I am. So if I, your Lord and Teacher, have washed your feet, you also ought to wash one another’s feet. For I have given you an example, that you also should do just as I have done for you. Truly I tell you, a servant is not greater than his master, and a messenger is not greater than the one who sent him. If you know these things, you are blessed to do them.

1) Why did Jesus ask the disciples if they knew what He had done for them? (verse 12)
After Jesus washed the disciples’ feet He replaced His robe and proceeded to engage them in conversation as to why He did what He did. Previously, in verse 4, Jesus removed His robe after the Passover meal and wrapped a towel around His waist in preparation for foot washing. This common gesture of wearing a towel signified Jesus taking on the role of a slave. This would have baffled the disciples! Only slaves washed the feet of their master, but not even Jewish slaves were allowed to wash their masters’ feet (NKJV Chronological Study Bible Notes). To watch Jesus undertake such a menial task would have been beyond the understanding of the disciples. Many a time the disciples did not understand what Jesus was doing or teaching; Jesus knew they could be “slow” to understand. In Mark 8:14-21 Jesus told His disciples to watch out for the yeast of the Pharisees, but even as they discussed it among themselves, they did not understand Jesus’ meaning. They concluded His remark was because they’d forgotten to bring bread. Jesus rebuked them harshly and asked, “Don’t you understand yet?”. (Mark 8:21) In Matthew 15:2-19, Jesus criticizes the Pharisees for focusing on hand-washing traditions instead of God’s heart to honor Him. The disciples told Jesus the Pharisees were offended, but Jesus told them to leave the Pharisees alone as they were blind and were leading each other into a pit. The disciples again, not understanding, asked Jesus to explain. Jesus responded, “Do you still lack understanding?”. (Matthew 15:16) There were even times the disciples were afraid to ask Jesus questions. (Mark 9:30-32, John 16:16-19) Because His example of humble servitude was so critically important to His disciples imitating, He wanted to be sure they understood the full weight of His actions.

2) Why did Jesus command the disciples to wash one another’s feet? (verse 14)
Jesus wanted the disciples to understand what being humble, loving, and serving others really meant. Jesus knew a mere parable would not suffice, so He went out of His way to actively demonstrate what humility looked like by washing the filthy feet of His disciples. This act of humble love was an entirely new concept for the disciples. John Dickson explains, “The word humility in both the ancient Greek and Latin meant low, as in low to the ground. It had an entirely negative connotation. In a world that loved reputation and honour above pretty much anything else, humility just didn’t make sense.” Jesus wanted His disciples to become humble servants of each other and those around them who desperately needed to experience Christ’s offer to rescue them from sin. The only way for the disciples to grasp this concept was for Jesus to live it out for them in an unforgettably tangible way. He then commanded them to follow His example and do the same.

3) What did Jesus mean by “a servant is not greater than his master, and a messenger is not greater than the one who sent him”? (verse 16)
If Jesus, as their Teacher and Lord, could do such a menial task as wash their feet, then the disciples, as His students, are not above Him, and should do likewise. They were to follow His example and become servants. Jesus expressed this sentiment many times as He modeled a life of love for His disciples. (Matthew 10:24, Luke 6:40) In Luke’s record of the Passover where Jesus washed their feet, a dispute arose among the disciples about who should be considered the greatest. (Luke 22:24) It could be this discourse that prompted Jesus to embark on the foot washing ceremony. Jesus told them not to be like the kings who rule over the Gentiles because their main concern was status. Instead, Jesus’ disciples must be like Him and serve with humble love. (Luke 22:27)

1) Why did Jesus ask the disciples if they knew what He had done for them? (verse 12)
On many occasions, the disciples didn’t understand what Jesus said or why He did some of the things He did. Jesus even had to rebuke them at times for taking His intended meaning beyond what He wanted them to understand. Can we blame them? After all, Jesus was God in the flesh. It would have been difficult for them to understand His divinity just as it is for us today. Sometimes, we go through difficult circumstances that leave us questioning God. A few years ago, I was betrayed by a close family member. When it happened, I was in total shock. I felt like Joseph when his brothers placed him in a pit and sold him into slavery. (Genesis 37:12-36) My life literally shattered that day! All I could think is, “Why?!”. I prayed for God to give me answers, but it was slow. He kept telling me to be patient. Little by little, things were revealed until I had the whole story. We need to wait on God to give His answers in His time. He is faithful to reveal Himself in the context of a relationship with Him as we study Scripture, listen to sermons, and seek wise counsel from other believers in Jesus. Even in the struggle, God graciously gives purpose. It wasn’t until Jesus’ death and resurrection that the disciples fully understood that Jesus’ example of humble servitude was to be the foundation by which they extended the love of Jesus to others. Are there circumstances in your life you don’t understand? Instead of worrying, or bringing your own solution, ask God for guidance through prayer. Read the Scriptures and seek godly counsel. He will be faithful to reveal His answer in His time. Just be patient.

2) Why did Jesus command the disciples to wash one another’s feet? (verse 14)
The command to wash one another’s feet in humble service extends to us as Christ-followers also. Jesus was the epitome of humility, and we are called to be like Him. (Romans 8:29) It doesn’t matter if we are the CEO of a company or a janitor, all who have surrendered their lives to Jesus are to serve others with humble hearts. I know someone who refused to help a former employee when he became Department Manager (we’ll call him C). The employee (P) was so disappointed. P confided to me that when C worked with him before becoming Manager, he would assist him in anything he needed. As Manager, however, C refused to take his calls. P couldn’t believe he was treated in such a manner after all he did for C when they worked together. We, as Christians are called to service regardless of our position in life. Philippians 2:3 states, “Do nothing out of selfish ambition or conceit, but in humility consider others as more important than yourselves”. As Christians, we need to wash each other’s feet.

3) What did Jesus mean by “a servant is not greater than his master, and a messenger is not greater than the one who sent him”? (verse 16)
“The world asks, “How many people work for you?”, but the Lord asks, “For how many people do you work?”” (Warren W. Wiersbe). A friend told me, while he was at the bank one day, he observed the CEO walking the floor. There was a piece of paper on the ground. The CEO, without thinking twice, picked it up, threw it away and continued walking the floor. My friend was absolutely amazed because, in his mind, the CEO could have easily called the janitor or another employee to pick up the trash. But he didn’t, he did it himself. This showed his humility. It wasn’t beneath him to pick up that paper. Loving and serving others isn’t about us, but Who we work for. Whatever we do, we are to do it for the benefit of others and, most importantly, for the glory of God. (Colossians 3:17) Reiterating Philippians 2:3, other people are more important than us, and our job as Christians is to serve them. If Jesus did it, so should we! (Philippians 2:5-11)

What do YOU think?! Share Here!
Missing the connection to our other Journey Study?
Catch up with Do As I Do!

This is Word Week Three!
Don’t miss out on the discussion!
Sign up to receive every GT Journey Study!