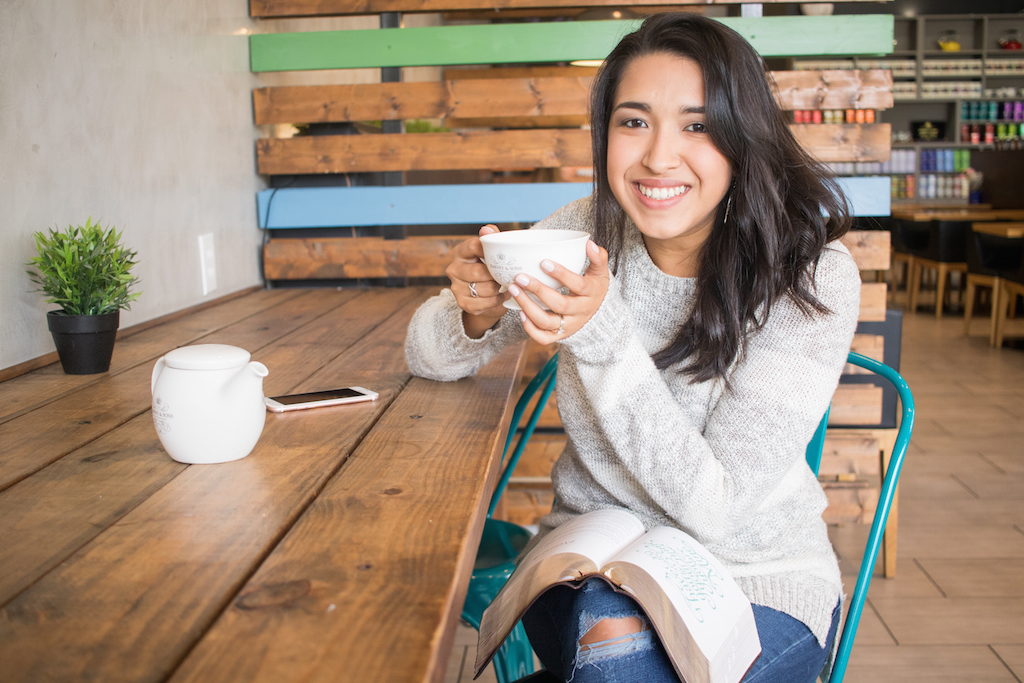 I never knew why he looked so sad up there.
Jesus, that is, hanging on the cross. I wondered.
Not knowing in the first place why He was even on it.

The night before Halloween of 2002, I found out. The Gospel was first shared with me that night. And while, yes, I knew there was a God and He created stuff, I knew nothing of His love and plan of redemption through Jesus. As a 12-year-old girl, sitting at the round table in our kitchen, on October 30th, I uttered my first words to Him in the form of a prayer and felt a weight lifting off my shoulders in exchange for peace.

And that was just the start.

I then began attending youth group. Eventually, I was hooked.
This Jesus thing, I was getting it down. I attended every Sunday, Wednesday and any other day I could. I quickly started memorizing the right answers and correct phrases to pray. I read what I could understand in the Bible and eventually picked up a guitar.
So you know what that means, right?
I suddenly joined the praise team.
Not going to lie, I took pride in how well I did the Christian thing. So much so that before I knew it, it was all out of self-righteous motions and muscle memory.
I grew stagnant.
Then boys and relationships came into the mix, which complicated things…

I guess you could say I had a rather sheltered childhood. So when college came, I managed my freedom poorly. I thought I was “strong enough” to flee temptation or “holy enough” to not be “stained by the world”.
I fell.
I fell hard.

I thought attending a Christian university I would undoubtedly grow me in my relationship with God and rekindle the flame, so to speak. I’d swear off dating for at least two years (as a senior in high school I had my first boyfriend and things didn’t end so well) and “focus on God more and my studies”.

Reality is, I met a boy during freshman orientation before classes even started.
He was persistent.
And not a believer.
I said yes to the “will you be my girlfriend” question and I was instantly convicted. Before I knew it, we were kissing and doing other things and thus, my true self started slipping away.
The Holy Spirit’s conviction never ceased.
I just grew numb, careless and became a really good liar.

I was that girl, the one that gets so wrapped up in an unhealthy relationship,
the one that compromises,
the “yes girl”,
the one that lies to her friends and family,
the one that we all yell at in the movies, screaming, ‘don’t get back together with him, you can do better’!

Truth is, I was insecure, weak, and entangled in sexually immorality. Having sex before marriage will do that to you. I had tied myself to this guy in ways I wasn’t supposed to. Meanwhile, the entire time, I lived that double life. You know, the one where you kill yourself trying to still make it to a church on Sunday or walk into the Christian university weekly chapel service, sing the songs, bring your dusty Bible and listen to the message, all while pretending you aren’t in bondage to this “secret sin” or hoping you aren’t pregnant.

Psalm 16 begins by saying “apart from you God, I have no good thing “, later it adds, “the sorrows will increase of those who run after other gods“.
I was living my life apart from God and gripping tightly to a relationship and false idea of love I had crowned as my idol.
I cried myself to sleep every night because of it.

I finally had enough. I prayed for strength to let go of the toxic relationship that had entangled me for so long and when I finally broke it off, my knees hit my bedroom floor and I wept.
I repented.

I also confessed. I started telling friends the reality of my first year and a half in college.
I was transparent.

Two months later, I was with new friends I’d made at the church I started attending after the breakup. Again, God led me to share what he had just redeemed me from and before dropping me back off at my apartment, they offered to pray for me. Placing their hands on my shoulders, they specifically prayed that all soul ties, emotional ties, and physical ties be broken in the name of Jesus.
The presence of God filled that car in a way I’ll never forget.
I walked out with a giant smile on my face, feeling as light as a feather. (It was 3 AM – college life.)

At 7 AM the next morning I woke up to my roommates shouting in the living room. My door opens and they jump on my bed saying, “Crystal, wake up! You’ve got to see this! Hurry!” I stumbled out of bed and into the cold living room, where I found the door wide open and saw snow everywhere!
Snow, like I’d never seen before, covered the campus. (I’m from Houston, Texas.)

Walking to class, I passed my car covered in snow.
That instant I heard God say, “Crystal, this is how I see you. You are white as snow.”

It took my breath away and tears went everywhere.
Isaiah 1:18 came to mind:
“Come now, let’s settle this,” says the LORD. “Though your sins are like scarlet, I will make them as white as snow.”

Oh, I was lost, sweet friend.
So outside of myself.
My sins were like scarlet, but God!
He drew me back in.
He showered me with grace and I was never the same.

I continued growing in my faith like never before, so lost in love with God. Three years later, I was pursued by a fearless, man of God that continued to challenge me in transparency and righteousness. Calvin and I got married in August of 2014 and just 3 months later, we found ourselves answering the call to plant a church in Katy, Texas. We were 24 and 22. At Christ’s Mercy Church, Calvin is the lead pastor and I am the worship leader. I also lead our women’s events and oversee women’s discipleship.

My life goal is to communicate Jesus to the masses with transparency and grace, because Jesus doesn’t just rescue us from our darkness and keep us safe in His pocket until eternity.

No, he fills us with his Spirit,
empowering us to go set the world ablaze for Him,
one redemptive story at a time.

So, don’t forget your story. Share it!
Because what He did for you and me, He is ready to do for many.

Want to study with us? Sign up for daily Journey Studies!
Want to read more stories like Crystal’s?